CHARLOTTE, N.C., Sept. 4 (UPI) -- A sand sculpture of President Barack Obama in North Carolina survived heavy rains during the weekend, the organization that commissioned it said.

Nora Battle, a spokeswoman for South Carolina's Myrtle Beach Convention and Visitors Bureau, which commissioned the sculpture to mark the start of the 2012 Democratic National Convention, said the 15 1/2 ton sculpture at BlackFinn Saloon in Charlotte sustained some damage to its arm and bust during Saturday's heavy rains, The Charlotte Observer reported Tuesday.

Battle said the damage was repaired within 45 minutes Sunday morning.

The sculpture was created in three days by a team of five sculptors from Team Sandtastic of Sarasota, Fla.

Odd News // 6 hours ago
Kitten saved from traffic takes 80-mile Uber ride to rescue
May 17 (UPI) -- A kitten rescued from traffic by a Florida woman ended up taking an 80-mile ride in an Uber to an animal rescue facility.

Odd News // 7 hours ago
Singapore coffee shop workers find large python in toilet
May 17 (UPI) -- Workers at a coffee shop in Singapore received a scare when they went to investigate a noise in the bathroom and found a large snake slithering in a toilet.

Odd News // 8 hours ago
British Columbia boy doubles own world record for Jenga stacking
May 17 (UPI) -- A British Columbia boy with a gift for balance broke his own Guinness World Record by stacking 1,400 Jenga blocks on a single block -- more than doubling his previous record.

Odd News // 9 hours ago
60-year-old braids of hair donated to Michigan charity
May 17 (UPI) -- A Michigan woman who received some braids of hair from her aunt when she was 12 years old donated the 60-year-old locks to a charity that makes wigs for children. 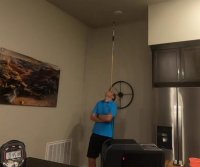