CHRISTCHURCH, England, Aug. 30 (UPI) -- The family of a British 8-year-old who found a chunk of whale vomit on the beach said the find could be worth more than $60,000.

Charlie Naysmith, of Christchurch, England, said he discovered the chunk of ambergris at Hengistbury Head and took it home. His family researched the object and found out it is worth between $16,000 and $63,000, the Daily Echo of Southampton, England, reported Thursday.

The boy's father, Alex Naysmith, said experts were working to determine the exact worth of the item.

"He is into nature and is really interested in it. We have discovered it is quite rare and are waiting for some more information from marine biology experts," he said.

Experts said ambergris, which is created in the intestines of a sperm whale and comes out in vomit, is prized for its ability to prolong the scent of perfume.

Odd News // 4 hours ago
Lost $250,000 lottery ticket found under winner's dresser
May 18 (UPI) -- A Virginia woman ended up getting lucky twice over when she lost her $250,000 winning lottery ticket and found it in time to claim the prize.

Odd News // 4 hours ago
Canoe team seeking Mississippi River record faces bridge closure obstacles
May 18 (UPI) -- A group of paddlers seeking the Guinness World Record for fastest canoe trip down the Mississippi River said they are ahead of schedule, despite delays from a bridge shutdown. 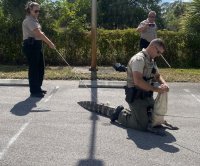