DORMONT, Pa., March 25 (UPI) -- While donating books to the Dormont Historical Society in Pennsylvania, a man discovered he was actually returning overdue library books from the 1920s.

The books were checked out from Dormont School in the 1920, which is now the Dormont Municipal Building, home to the historical society, KDKA-TV, Pittsburgh, reported Friday.

Paul Kaminski, of Dormont, said he drove a box of books back from his cousin's home in Arizona. Inside the box he discovered the overdue books.

"A fine of five cents a day shall be paid on each book which is not returned according to the above rule," was printed in the books, Kaminski said.

Kaminski said the books were probably checked out by his father and uncle, who attended Dormont School in the 1920s. 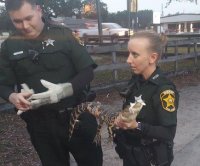