Woman stripping 'to pay for justice'

HUNTINGTON, N.Y., Jan. 9 (UPI) -- A New York state woman working as a stripper to pay legal bills in her custody battle over her 4-year-old son says she is "dancing to pay for justice."

Nicole Montiglio, 31, of Huntington said she posed for Playboy in her college days and started stripping after she lost custody of her son, Sal, in November, the New York Post reported Monday.

"I'm dancing to pay for justice, to get my baby back," Montiglio said.

Montiglio said a judge took custody away from her because investigators were unable to substantiate her repeated claims that her estranged husband, Thomas, was abusing Sal.

The mother said her son, who was placed with his father's brother, told her Thomas was abusing him while bathing him.

Odd News // 12 hours ago
Colorado WWII vet reunited with items stolen in Prague 76 years earlier
Dec. 7 (UPI) -- A man using his metal detector in the woods around Prague reunited a Colorado man with a silver bracelet and other items stolen while he was serving in World War II.

Odd News // 13 hours ago
Gymnast alternates hands for 31 back handsprings, breaks world record
Dec. 7 (UPI) -- A South African gymnast added another Guinness World Records title to his name by performing 31 one-handed back handsprings in a row while alternating hands. 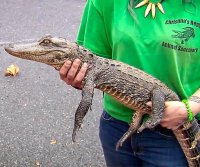 Odd News // 13 hours ago
Alligator rescued from frigid river in Pennsylvania
Dec. 7 (UPI) -- The owner of a Pennsylvania reptile sanctuary rescued a 3-foot alligator spotted by fishermen in the frigid waters of a river.

Odd News // 16 hours ago
Escaped cow runs loose through Illinois streets
Dec. 7 (UPI) -- Police in Illinois put their cowboy skills to the test when a loose cow went wandering in traffic and led officers on a chase.