In 1519, Portuguese navigator Ferdinand Magellan began a voyage to find a western passage to the East Indies.

In 1873, financial chaos forced the New York Stock Exchange to close. It remained closed for 10 days.

In 1966, Britain's Queen Elizabeth II launched the Cunard liner bearing her name, often shortened to QE-2, which eventually became the only ocean liner on the once thriving trans-Atlantic route.

In 1984, Muslim militants bombed the U.S. Embassy annex in Lebanon, killing 23 people, including two Americans. It was the third terrorist attack on U.S. installations in Beirut in 17 months.

In 1991, the Cambodian government and three rebel factions agreed on a form of future U.N.-supervised elections.

In 2001, Pennsylvania Gov. Tom Ridge was named to lead the new U.S. Department of Homeland Security.

In 2002, Israeli forces demolished all but one building of the office compound of Palestinian chief Yasser Arafat after a suicide bomber killed seven people on a Tel Aviv bus.

In 2003, armies of technicians in the Mid-Atlantic states worked to restore power to 2.5 million customers still in the dark from Hurricane Isabel. The storm left at least 25 dead in seven states.

In 2005, the Bush administration's disapproval rating reached a reported all-time high of 58 percent in a USA Today/CNN/Gallup Poll.

In 2006, Venezuela President Hugo Chavez called U.S. President George W. Bush "the devil" in a U.N. speech and accused the United States of trying to dominate the world.

Also in 2006, a poll indicated that U.S. voters had an "overwhelmingly negative" opinion of the Republican-led U.S. Congress.

In 2007, Norman Hsu, a major Democratic fundraiser for U.S. Sen. Hillary Clinton's presidential campaign, was charged with defrauding investors of $60 million. Clinton said funds donated on her behalf would be returned.

Also in 2007, the U.S. dollar dropped to record lows against the euro in a week of trading, beginning on this date.

In 2008, the White House formally announced a vast bailout plan for U.S. financial institutions including full authority for the Treasury Department to buy up to $700 billion in so-called toxic mortgage-related assets to restore confidence among investors and banks reluctant to make loans.

Also in 2008, more than 50 people were killed and hundreds injured when a truck bomb exploded outside the popular Marriot Hotel in Islamabad, Pakistan.

In 2009, with no timetable for withdrawal of U.S. troops from Afghanistan, officials said the United States was in the midst of a massive buildup of CIA and other intelligence resources in that country similar to operations in Iraq and Vietnam.

In 2010, the U.S. recession, called the longest since World War II, beginning in December 2007, ended in June 2009, the National Bureau of Economic Research announced in a committee report. However, despite some signs of economic recovery, unemployment remained high.

Odd News // 11 hours ago
Watch: Alligator swims through Alabama woman's flooded yard
Sept. 17 (UPI) -- An Alabama woman shared video of the surprising sight that greeted her when she looked out into her Hurricane Sally-flooded front yard: an alligator having a swim.

Odd News // 11 hours ago
Watch: Man spotted wearing live snake as a mask on city bus
Sept. 17 (UPI) -- Transportation officials in a British city responded to viral photos from a municipal bus by reminding residents that snakeskin is not a good material for face masks -- especially when still attached to a snake. 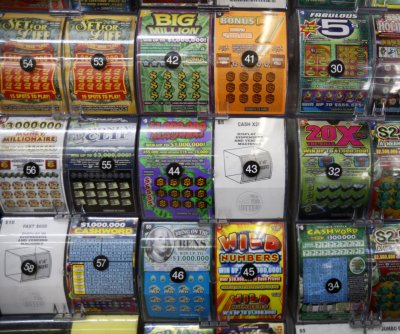 Odd News // 12 hours ago
Woman stranded with flat tire discovers she won $100,000
Sept. 17 (UPI) -- A North Carolina woman stranded on the side of a road with a flat tire had her day turn around when she checked her email and discovered she had won a $100,000 lottery jackpot.

Odd News // 12 hours ago
Wildlife officials: Tennessee 'tiger' likely a native bobcat
Sept. 17 (UPI) -- Wildlife officials in Tennessee said they now believe reports of a tiger on the loose in the Knoxville area are the result of mistaken identity.

Odd News // 14 hours ago
Reported stranded dolphin in Britain was a big tuna
Sept. 17 (UPI) -- Coastguard crews responded to an estuary on a report of a possible dolphin stranded in shallow waters -- but arrived to find the wandering creature was actually a 10-foot tuna. 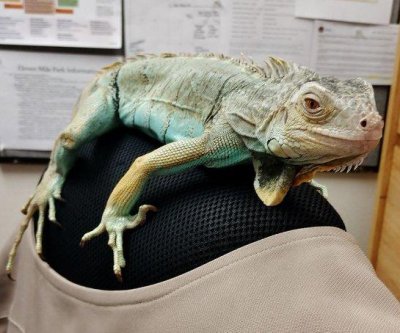 Odd News // 15 hours ago
Watch: Iguana found wandering loose in Colorado state park
Sept. 17 (UPI) -- A Colorado State Parks employee responded to a call about an unusual animal and was surprised to find exactly what the caller described: an iguana wandering loose in a park.

Odd News // 17 hours ago
Wooden Melania Trump statue replaced with bronze after arson
Sept. 17 (UPI) -- A wooden statue of Melania Trump that was damaged by an arsonist in July has been replaced by a bronze version near the first lady's hometown in Slovenia.