Chestnut, who has won multiple world competitive eating titles and broke the Cincinnati event's record last year by eating 42 bratwursts, fasted for two days in advance of Saturday's competition, The Cincinnati Enquirer reported Sunday. The California competitor said he was a little disappointed in his performance this year, despite the win before a crowd of 4,000.

"I didn't get into a rhythm; I kept overfilling my mouth," Chestnut said. "I'm a little bummed that I didn't break the record, but at least I have plenty of room in my tummy to party."

Chestnut took home $2,000 in prize money from the eating contest, which is part of the annual Oktoberfest-Zinzinnati.

SLUPSK, Poland, Sept. 18 (UPI) -- A Polish man has been arrested for keeping four venomous snakes in his apartment, police have said.

The 30-year-old man from Slupsk, Poland, has been charged for exposure to grave bodily injury or loss of life and violating the Washington Convention on International Trade in Endangered Species of Wild Fauna and Flora, Polskie Radio reported Sunday. He faces up to five years in prison.

The man kept an Indian cobra and Gaboon viper in his apartment, both of which can cause instant death, experts say.

The man's snake collection will be given to a zoological garden in Poland.

Robbers say they were scared away by lion

UPPER DARBY, Pa., Sept. 18 (UPI) -- Two 19-year-old Pennsylvania women are charged with burglarizing 25 homes, one of which they claimed they fled after encountering a lion inside, police say.

The women admitted to the burglary of the homes, all of which occurred since July and during daylight hours, police said. They allegedly stole electronics, jewelry, clothing items, makeup and about $22,000 in cash, the Philadelphia Inquirer reported.

"They just enjoyed stealing," said Michael J. Chitwood, superintendent of police in Upper Darby, Pa., where most of the thefts occurred. "They used people's homes as their own private shopping center."

Gifford and Singleton said they saw a lion in one of the houses they attempted to enter, but no one was at the residence when police checked.

"If we find a lion, it will be a bigger story than this," said Chitwood.

COUNCIL BLUFFS, Iowa, Sept. 18 (UPI) -- Police in Council Bluffs, Iowa, say the mystery of where the armless "Hot dog Man" statue came from has been solved -- its owner has claimed it.

The 6-foot-tall cartoon-like hot dog statue was found Sept. 2 sans arms, The Daily Nonpareil in Council Bluffs reported Thursday. Despite tips from across the country and even around the world, where it came from puzzled police, Capt. Terry LeMaster says, until Curtis Wennhold came forward to claim it.

"[Wennhold] has the arms; to me, that's enough proof that it is his," LeMaster told the newspaper. "We'll be glad to give it back to him."

Wennhold told authorities he found the 400-pound statute in California and brought it back with him to Iowa, only to have it stolen from his yard by teenagers who broke off its arms while loading it into a vehicle. Only the culprits apparently were "creeped out" by the statue's leering grin and put it out on a street corner where a citizen spotted and called police, thinking it was a man in a costume stalking children at the bus stop, LeMaster said.

Police have identified the teens involved but so far no one is pressing charges.

"I'm just glad the statue is going to be claimed," LeMaster said. "Then we'll go from there."

Odd News // 5 hours ago
Moose sent back to the wild after roaming New York for weeks
May 17 (UPI) -- A young moose that was on the loose for weeks has finally been returned to the wilds of the southern Adirondacks of New York.

Odd News // 6 hours ago
Missouri woman wins $55,558 after spur-of-the-moment lottery purchase
May 17 (UPI) -- An unidentified woman from Missouri won $55,558 after she listened to her instincts about buying a scratch-off lottery ticket. 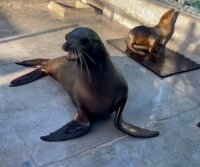 Odd News // 22 hours ago
Sea lion previously rescued from highway found in California storm drain
May 16 (UPI) -- SeaWorld Rescue in San Diego said a sea lion that made headlines for blocking a freeway in January is undergoing a behavior analysis after being rescued from a storm drain.