Nude man on beach claimed he was 'helping'

VERO BEACH, Fla., Aug. 26 (UPI) -- A man accused of strolling naked on a Florida beach told officers they couldn't arrest him because he was "helping people," police said.

Vero Beach police said a couple and their teenage daughters flagged down an officer shortly before 8 p.m. Aug. 19 and reported a man exposing himself in the shower area of the Humiston Park beach, TCPalm.com reported Friday.

The officer arrived to find Robert Johnson, 57, standing nude in view of about 15 to 20 people with his genitalia "plainly visible," the arrest affidavit states.

"You can't take me to jail for this, I'm just out here helping people," Johnson allegedly told the officer when he was asked for identification.

Johnson was arrested and charged with indecent exposure and resisting an officer without violence. It was not clear Friday what sort of help Johnson was offering his fellow beachgoers.

Odd News // 5 hours ago
Wrong-number text gets high school team a video call with the Buccaneers
Nov. 30 (UPI) -- A Michigan high school basketball team's wrong-number mistake in a group text led to the team getting an unexpected video chat session with the Tampa Bay Buccaneers. 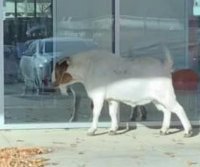 Odd News // 8 hours ago
Goat escapes from city-owned herd, wanders town for four days
Nov. 30 (UPI) -- A goat employed by an Iowa city to clear invasive plant species escaped from the rest of the herd and went wandering for four days.