DES MOINES, Iowa, July 5 (UPI) -- Authorities in Iowa said a teenager who apparently passed out drunk on some railroad tracks was not seriously injured when a train passed over him.

Des Moines police said engineers for the Iowa Interstate Railroad spotted the teenager, identified as Christian Latshaw, 17, on the tracks near East First Street at about 10:45 p.m. Sunday in Des Moines and they applied the train's emergency brake, The Des Moines Register reported Tuesday.

Police said the engine and first car of the train passed over Latshaw before the vehicle came to a stop.

Latshaw, who had a pair of lacerations on the back of his head and a bruise on his right thigh, told officers he blacked out after drinking at the 80/35 Music Festival, which was taking place about a mile away.

Police said Latshaw was given a delayed referral to juvenile court on charges of trespassing and public intoxication.

Odd News // 29 minutes ago
Lost Arizona dog lived on her own for 15 months
May 16 (UPI) -- An Arizona animal rescue group said a dog who was presumed dead after going missing from her new home was found to have been living on the loose for 15 months.

Odd News // 4 hours ago
Baby elephant takes bed from keeper in viral video
May 16 (UPI) -- A baby elephant was filmed stealing an air mattress from its keeper in a video that has gone viral on Twitter.

Odd News // 3 days ago
Friday is National Blame Someone Else Day
May 13 (UPI) -- Friday marks your opportunity to shirk some responsibility, or indulge in an apple pie, fruit cocktail or crouton-filled salad. 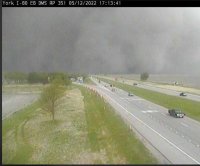 Odd News // 3 days ago
Massive dust storm engulfs drivers on Nebraska highway
May 13 (UPI) -- Motorists in Nebraska this week found themselves stuck in a massive dust cloud during a major thunderstorm, dropping visibility to near zero and whipping up hurricane-force winds.