The moon is waning. The morning star is Saturn. The evening stars are Mercury, Neptune, Uranus, Jupiter, Venus and Mars.

In 1990, U.S. President George H.W. Bush and Soviet leader Mikhail Gorbachev opened a four-day summit in Washington, focusing on the role of a united Germany in Europe.

In 1994, U.S. Rep. Dan Rostenkowski, D-Ill., was indicted on felony charges, including embezzlement.

In 2003, Eric Robert Rudolph, the long-sought fugitive in the 1996 Atlanta Olympic bombing and attacks on abortion clinics and a gay nightclub, in which two died, was arrested while rummaging through a dumpster in North Carolina.

In 2004, a bomb ripped through a Shiite mosque in Karachi, Pakistan, while worshippers were saying evening prayers. Sixteen people were killed.

In 2007, U.S. President George W. Bush called on the world's top polluters to develop a strategy to cut emissions of greenhouse gases.

Also in 2007, a civilian Nigerian president was succeeded by another civilian for the first time.

In 2008, U.S. Sen. Barack Obama of Illinois moved closer to capturing the Democratic presidential nomination. At the end of May, the last full month on the party's primary calendar. Obama led Sen. Hillary Clinton of New York by a reported more than 150 delegates.

In 2009, Dr. George Tiller, 67, who ran an abortion clinic in Wichita, Kan., was killed while ushering at a church service. Scott Roeder, a fervent abortion rights opponent, was charged with first-degree murder.

In 2010, a co-founder and No. 3 man of the al-Qaida terrorist network, Mustafa Abu al-Yazid, was reported killed in an American drone attack in Pakistan.

Also in 2010, Israeli navy commandos attacked a pro-Palestinian humanitarian aid flotilla of cargo ships and passenger boats bound for Gaza. Nine activists on one of the boats, whom Israelis said were clearly hostile, were killed.

Odd News // 7 hours ago
Company offering $5,000 for 'wacky' cookie recipes
Dec. 1 (UPI) -- A kitchen supply company announced it is seeking a "Cookie Connoisseur," who will be paid $5,000 to create unique cookie recipes with "wacky" ingredients.

Odd News // 9 hours ago
Gull tangled in fishing line rescued from rooftop
Dec. 1 (UPI) -- Firefighters in Britain shared photos from the rescue of a herring gull that became tangled in some fishing line that got caught on some cables on a rooftop. 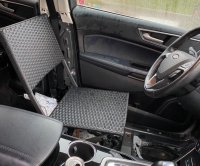 Odd News // 11 hours ago
Wedding ring found five years after being lost on British beach
Dec. 1 (UPI) -- Officials in southern England said a platinum wedding ring found on an area beach was returned to its owner, who revealed the precious item had been lost five years earlier.