Kerrin Frey of River Falls said she started work on the dress for her daughter Tara, who is now a senior at River Falls High School, six years ago after seeing moms weaving gum wrappers at a hockey game, KARE-TV, Minneapolis/St. Paul, Minn., reported Wednesday.

Frey said she lost track of the amount of wrappers she put into the project, which also included a matching vest for Frey's date.

"We even called Starburst to see if we could just buy the wrappers from them without the candy in them," she said. She said the company refused.

"It's going to be a little bit too much attention, but hey, she worked hard on it," Tara Frey said.

"Our theme for the prom is 'Candyland,'" the student said, "so kind of lucked out on that one." 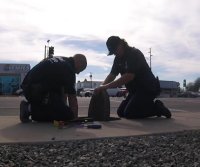 Odd News // 1 hour ago
Kitten rescued after more than week trapped in storm drain
Dec. 6 (UPI) -- Animal rescuers and firefighters teamed up in Arizona to rescue a kitten trapped in a storm drain for more than a week. 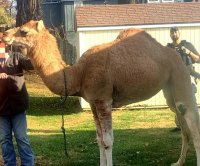 Odd News // 3 hours ago
Police chase loose camel through Kansas city
Dec. 6 (UPI) -- Police in Kansas said they spent "the entire day" Sunday chasing an escaped camel that trotted across a golf course, ran down a highway and visited a few neighborhoods.

Odd News // 2 days ago
Cash, checks found inside wall of Osteen mega-church 7 years after break-in
Dec. 3 (UPI) -- A plumber doing work at Joel Osteen's mega-church in Houston found a large amount of money hidden inside a wall seven years after $600,000 was reported stolen during a break-in.
Advertisement