'The Queen' listed as owner of Mass. home

WELLESLEY, Mass., Feb. 8 (UPI) -- Officials in Massachusetts said "Her Majesty, the Queen" -- as in Queen Elizabeth II -- is listed as the owner of a $1.5 million suburban Boston home.

The Norfolk Registry of Deeds said the Wellesley colonial home was purchased Jan. 18 and lists the queen as the owner, despite it actually being purchased by the Canadian Consulate in Boston, WCVB-TV, Boston, reported Tuesday.

"Since the queen is still our head of state, the transaction might appear that way," Canadian Consul General Patrick Binns said.

Binns said the home is slated to replace the consul-general's current Weston residence and it is unlikely the queen has any knowledge of the property, which was paid for by the Canadian government.

Odd News // 21 hours ago
Alligator found hiding under vending machine at Florida gas station
June 17 (UPI) -- Three sheriff's deputies in Florida responded to a convenience store to help sort out an unusual problem -- an alligator hiding under a vending machine.

Odd News // 22 hours ago
Escaped elk runs loose next to Wisconsin highway before capture
June 17 (UPI) -- Authorities in Wisconsin said an elk that escaped from a farm went for a run along the highway before being safely recaptured.

Odd News // 22 hours ago
Lost class ring found on Wisconsin campus after 45 years
June 17 (UPI) -- A Wisconsin college employee using his metal detector on the campus found a high school class ring underground that turned out to have been lost 45 years earlier.

Odd News // 23 hours ago
Briefcase of old photos rescued from trash at New York park, returned to family
June 17 (UPI) -- A New York man who found a briefcase filled with old photos in a public park trash can was able to reunite the photos with family members of the owners.

Odd News // 1 day ago
Woodpecker destroys nature camera at Russian nature reserve
June 17 (UPI) -- A nature reserve in Russia said a nature camera disguised as a piece of bark had an unintended consequence when it was destroyed by a hungry woodpecker. 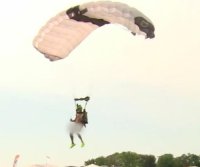