GLASGOW, Scotland, Jan. 30 (UPI) -- A mountain climber in Scotland fell 1,000 feet and then stood up to await rescue, the British military said.

The unidentified 35-year-old man from Glasgow slipped and fell Saturday afternoon on the 3,600-foot mountain in west-central Scotland, Scotland on Sunday reported.

He was among a group of more than 20 climbers who made a distress call after he vanished, the report said.

By chance, a military helicopter with a medical crew aboard was airborne on a training exercise and reached the scene within 30 minutes. The crew expected to find a dead man, but was shocked to spot the climber standing up, reading a map, the report said.

Helicopter officer Lt. Tim Barker said it was a shock to see the man alive after falling the height of the Eiffel Tower.

"We honestly thought it couldn't have been him, as he was on his feet reading a map," Barker said. "We were able to get in quite close to where he had landed and we winched our paramedic … down to the scene and it appeared that, beyond some superficial cuts and bruises and a minor chest injury, he was unscathed."

Odd News // 37 minutes ago
British Columbia boy doubles own world record for Jenga stacking
May 17 (UPI) -- A British Columbia boy with a gift for balance broke his own Guinness World Record by stacking 1,400 Jenga blocks on a single block -- more than doubling his previous record. 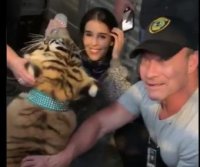