AUSTIN, Texas, Oct. 24 (UPI) -- A Texas pastor celebrated his 85th birthday by jumping out of a plane, the fifth year in a row he says he's returned to that item on his personal "bucket list."

Brushy Creek Baptist Church pastor John Gurley keeps going back partially to show older people "not to die while they're still alive," he said. "You can still live life to the fullest."

Gurley invited members of the Williamson County church he's led for 30 years and some relatives to share the moment with him Saturday, the Austin (Texas) American-Statesman reported.

He's not a thrill-seeker although he proved his bravery as a member of the "silent service" doing submarine duty during World War II. Gurley was inspired to jump out of planes after hearing about his brother, Raymond's stories serving with airborne troops in Normandy.

He became a pastor in 1948 and earned a little-used pilot's license.

Saturday's jump was from 10,500 feet in tandem with an instructor which he says he will do again at 90 if he feels well enough. 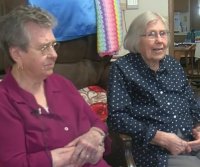