SACRAMENTO, Oct. 12 (UPI) -- The two-man team that took the top prize at a California college fishing championship said one member fished for 10 hours with a hook in his head.

Robert Matsuura, 23, said he was fishing alongside Sacramento State University fishing teammate Peter Lee, 22, during the FLW College Fishing Western Regional Championship Saturday at Folsom Lake when Lee's treble hook lure -- comprised of three hooks each connected to three smaller hooks -- struck him in the back of the head during an attempted cast, The Sacramento Bee reported Tuesday.

The pair said two of the three larger hooks were embedded in Matsuura's skull.

"I yelled at (Lee) to cut the line," Matsuura said. "Then I jumped in the driver's seat and drove straight to the ramp. I figured I'd go to urgent care to get it out and maybe come back later to fish. But there was a guy there saying, 'Hey, why don't we cut off the lure and the one treble hook that's not inside your head.' The other two hooks were just in too deep."

Matsuura said he took two Tylenols for the pain and continued fishing for 10 hours, with the two man team finishing the day with a haul 2 ounces heavier than that of closest rival Chico State University.

The student said he and Lee collected the $50,000 reward for their university and then set about removing the hook.

"A family friend is a dentist," Matsuura said. "He numbed it and pried it out." 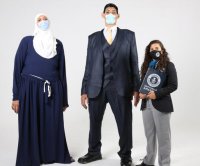