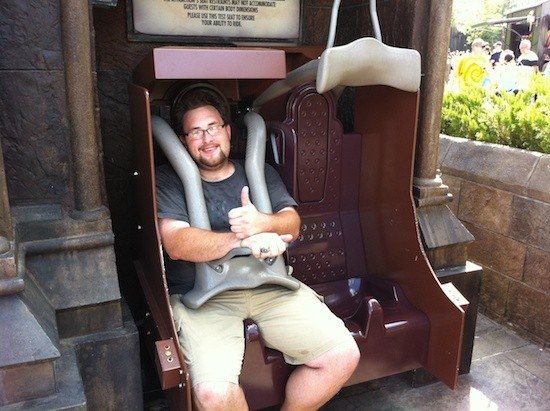 Picture courtesy of Orlando Attractions Magazine: Banks Lee had previously made it a goal to lose enough weight to be able to ride the attraction at Universal's Islands of Adventure. Since Sept. 10, 2010, a number of the seats have been adjusted to that larger occupants can ride safely. "The new test seats, which are outside the attraction and just before you get on the ride, feature three lights, a red one, yellow one and a green one. As the guest pulls the restraint down, the lights go from red to green. If a guest gets yellow, they’re asked to go in a special line with their riding party and are directed to the modified seats." - Matt Roseboom, editor-in-chief of Orlando Attractions Magazine

ABC News reported some larger patrons had complained safety devices were too tight to fully close -- the only ride in the park on which they could not fit.

"Ever since it opened, there has been some discussion about how people couldn't ride," said Matt Roseboom, editor-in-chief of Orlando Attractions Magazine, which reported the change during the weekend.

Test seats at the start of the line that previously told larger park-goers they were too large for the ride now direct them to a special row of seats designed for bigger riders.

"We're thrilled to be able to give more people the opportunity to experience this attraction," Universal Orlando spokesman Tom Schroder said.

Odd News // 2 days ago
Muddy dog rescued from Texas storm drain
May 20 (UPI) -- Animal rescuers in Texas fished a muddy dog out of a storm drain and were able to reunite the canine with his owner.
Advertisement