SaskPower spokesman James Parker said the man was boating May 23 on the Geikie River and became stranded when he could not find a path through the ice on Wollaston Lake, The StarPhoenix, Saskatoon, Saskatchewan, reported Tuesday.

The spokesman said the man chopped down four power poles Thursday, causing hundreds of people in the Wollaston Lake settlement to lose electricity.

A helicopter sent to investigate the outage found the man Friday morning.

"You should stay away from power lines, that's rule No. 1," Parker said. "But obviously this man was in a desperate situation and thought he had to do that."

Odd News // 17 hours ago
Siberian marathon might be coldest of all time at minus 63.4 degrees
Jan. 26 (UPI) -- A marathon in Siberia may have broken a Guinness World Record when runners braved temperatures of 63.4 degrees below zero.

Odd News // 19 hours ago
Overdue book returned to N.C. high school library after 43 years
Jan. 26 (UPI) -- A North Carolina high school said a book checked out from its library in 1979 was recently returned in the mail by a former student who apologized in a "heartfelt letter." 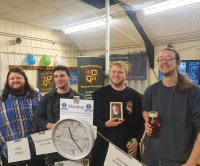 Odd News // 19 hours ago
British men play board game 'Dune' for 85 hours to break Guinness record
Jan. 26 (UPI) -- A quartet of British men broke a Guinness World Record by playing a board game for more than 85 hours. 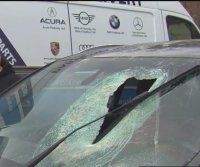 Odd News // 22 hours ago
Driver uninjured when concrete crashes through windshield
Jan. 26 (UPI) -- A driver said he feels lucky to be alive and uninjured after a chunk of concrete fell from a Massachusetts overpass and crashed through the windshield of his car.