LONDON, May 16 (UPI) -- Animal welfare groups in Britain say they are outraged by a school fundraising contest that involves placing ferrets down the trousers of competitors.

The charity "ferret legging" event is the idea of retired school headmaster Frank Bartlett, 67, who argued the competition would not harm the ferrets since they were docile, "would probably go to sleep," and would be placed down baggy trousers, The Telegraph newspaper reported Saturday.

But animal welfare groups say the endurance contest, in which the winning competitor is the last one to release the ferret from his trousers, would cause the animals unnecessary stress and discomfort.

Bartlett said the "lighthearted" contest would cause no harm to the ferrets.

"The event is being undertaken by people who have been involved in ferret care and welfare for many years," he said.

"We would never dream of doing anything that resulted in distress to any animal." 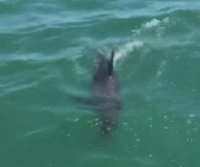