EVANSVILLE, Ind., Dec. 19 (UPI) -- A long-running story of holiday goodwill has resumed in Evansville, Ind., where "Christmas Pete" has made another mysterious donation, officials say.

Easter Seals Rehabilitation Center spokeswoman Pam Kirk told CNN Friday she received another in a series of yearly Christmas season calls from an anonymous donor known only as "Christmas Pete," who told her to look between a pine tree and some Dumpsters on the facility's grounds.

There she found a miniature, tin Christmas tree with 30 $100 bills attached, the U.S. broadcaster said.

"I think it gives us the feeling that we have our own personal Santa Claus," Kirk said. "It's really just the perfect example of the spirit of the season -- giving without expecting recognition in return, giving from the heart, and also making it fun."

CNN said since 1990, "Christmas Pete" has given the rehabilitation center nearly $65,000 -- with almost all of the gifts have been preceded by a phone call and hint that a package is waiting somewhere on the center's property. 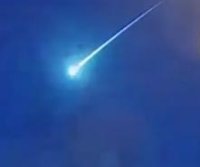