PALERMO, Italy, Oct. 22 (UPI) -- An Italian man who violated his house arrest requested jail to get away from his wife, but the judge sent him back home.

Santo Gambino, 30, who was arrested for dumping construction waste in March, was taken to court after he was caught violating his house arrest and asked to be given a jail sentence instead to escape his wife's "non-stop nagging" at home, the Italian news agency ANSA reported Thursday.

However, the judge sent Gambino, who lives outside Palermo on the island of Sicily, back home on house arrest and ordered him to "try to get along" with his wife.

Odd News // 7 hours ago
Confused kangaroo rescued from lake in Australian capital
Sept. 21 (UPI) -- A pair of Australian men came to the rescue of a confused kangaroo that was having trouble finding its way out of a lake in the country's capital. 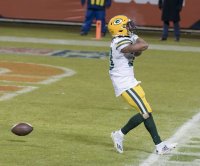 Odd News // 10 hours ago
Escaped cat found after three weeks wandering around JFK airport
Sept. 21 (UPI) -- A cat that escaped from a carrier while being loaded onto an Italy-bound flight was safely captured after three weeks of wandering the tarmac at New York's John F. Kennedy International Airport.