PEABODY, Mass., June 19 (UPI) -- Police said a Massachusetts firefighter arrested for harassing neighbors was caught on video threatening one of his alleged victims with a chain saw.

Ernest Perrone, 60, a Peabody firefighter, allegedly took pictures of neighborhood children without permission, made insulting comments and gestures toward a local gay couple and regularly threatened those living around him with violence, The Salem (Mass.) News reported Friday.

A police report said some neighborhood kids once splashed Perrone's truck with water while playing with a sprinkler and he threatened to "blow their ... heads off" if they did not dry the vehicle.

Police said that on another occasion a mother demanded Perrone return pictures he took of neighborhood children and he allegedly told her they could be found on child pornography Web sites.

Perrone was also videotaped in April by a neighbor while the firefighter was holding a chain saw over his head and mouthing the words, "I'll cut you both," the police report said.

Perrone was arrested on assault and harassment charges. He was released on $2,500 bail and is due back in court July 31. 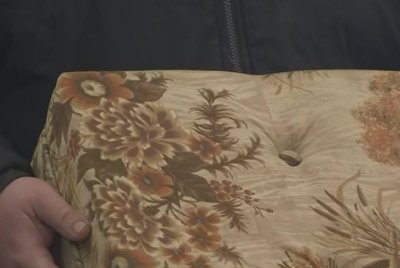