GEORGETOWN, Ky., May 19 (UPI) -- A Kentucky woman said she has received 24 toll violation notices from New Jersey and Maryland in the past two weeks despite not traveling to those locations.

Zelpha Mitsch, 89, of Georgetown, who said she's never been to New Jersey and last visited Maryland around 1946, said she has been getting "Notice of Enforcement Action" letters from transportation officials in the two states that accuse her of failing to pay tolls on the New Jersey Turnpike and the Fort McHenry Tunnel near Baltimore, the Louisville (Ky.) Courier-Journal reported Tuesday.

"It's got me puzzled," Mitsch said.

Mitsch said she used to have the 4680E license plate cited by the notices on her old blue Chevy pickup truck, but she removed it once it expired three years ago. She estimated the plates were stolen in February, before the dates on the letters.

The notices sent from Maryland did not include pictures of the offending vehicles, but the New Jersey notices bore photographs of the license plates on a variety of different vehicles.

Marian Pearcy, Mitsch's lawyer, said the notices have been shown to Floyd County Prosecutor Keith Henderson's staff and a stolen license plate complaint was filed. Pearcy said the theft report will be sent to law enforcement agencies across the country to help track the plates and to transportation authorities to ensure Mitsch does not lose her license as a result of the fines.

Odd News // 1 hour ago
Pony rescued from flooded field amid stormy weather in England
Feb. 18 (UPI) -- Animal rescuers in Britain said a water rescue team was dispatched to save a pony that was stranded in a flooded field. 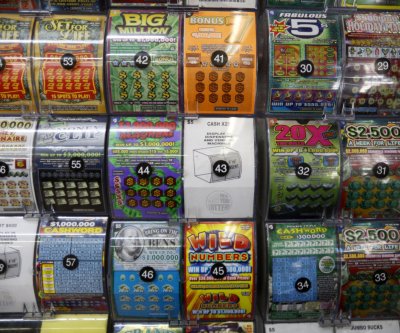 Odd News // 3 hours ago
Students assist with 'super flush' at Texas Rangers' new stadium
Feb. 18 (UPI) -- The Texas Rangers enlisted the help of about 300 local school kids Tuesday to break in the new Globe Life Field with a "super flush" event - flushing all of the stadium's toilets at once.

Odd News // 7 hours ago
Swedish bakery cooks up 661-pound semla bun
Feb. 18 (UPI) -- A Swedish bakery said it believes it has set a new Guinness World Record by baking up a semla bun, a traditional Shrove Tuesday treat, weighing in at 661 pounds.