In 1918, the first regular U.S. air mail service was established between Washington and New York City.

In 1941, the jet-propelled Gloster-Whittle E 28/39 aircraft flew over Cranwell, England, in the first successful test of an Allied aircraft using jet propulsion.

In 1962, Mercury astronaut Gordon Cooper was launched into space atop an Atlas rocket and completed 22 orbits.

In 1972, Alabama Gov. George Wallace was seriously wounded at a presidential campaign rally in Laurel, Md. Partially paralyzed but still a Southern political power for years, he died in 1998.

In 1992, the United States warned Saddam Hussein that allied military forces may "respond" if his troops attempted to repress Kurdish elections in northern Iraq.

In 2002, the White House said that President George W. Bush had received a CIA briefing in August 2001, the month before the terrorist attack on New York and Washington, warning that Osama bin Laden planned to hijack airplanes but nothing was said about possibly crashing them into buildings.

In 2005, Uzbek security forces were reported to have sealed off the center of Andijan where as many as 450 people may have been killed during anti-government protests.

In 2008, California joined Massachusetts as the only states in the union to legalize same-sex marriage. The California Supreme Court said the state constitution guaranteed marriage as a "basic civil right."

A thought for the day: Samuel Butler said, "The great pleasure of a dog is that you may make a fool of yourself with him and not only will he not scold you but he will make a fool of himself, too." 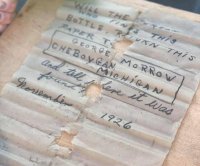 Odd News // 8 hours ago
Photographer unexpectedly captures proposal, finds couple on Twitter
June 24 (UPI) -- A photographer who happened upon a marriage proposal at a scenic San Francisco location was able to find the couple from the photos she snapped on social media.

Odd News // 12 hours ago
World's largest Rubik's cube assembled at Hong Kong mall
June 24 (UPI) -- A mall in Hong Kong broke a Guinness World Record when it commissioned the building of a Rubik's cube measuring 8.2 feet on each side.