People who showed up for the Saturday event, one of at least 50 scheduled around the world using social networking Web sites, said officers were stationed at the park and confiscated pillows prior to the brawl's planned 4 p.m. start time, the Detroit News reported Monday.

One attempted pillow fighter said he was told by an officer that about 5,000 pillows had been collected as of 4 p.m. Saturday.

Detroit Police spokesman James Tate said the event posed cleanup issues for the city, as large-scale pillow fights tend to leave large amounts of feathers behind, and officers were concerned that some people who didn't want to participate could be hit by mistake.

"They took my pillows but let me keep my cases," Michael Davis, 32, told the News. "They told me I needed a permit. I can understand."

However, some of those whose pillows were taken were less understanding, the newspaper said.

"I am furious," said Elida Quesada, 23. "It (a pillow fight) is so silly and childlike. It would have been fun. It seems like everything that is fun is illegal."

Odd News // 19 hours ago
Jogger followed by black bear in Wyoming park
April 21 (UPI) -- A jogger in Wyoming's Grand Teton National Park captured video when he caught the attention of a bear that followed him down the trail.

Odd News // 21 hours ago
Firefighters rescue dog alone inside moving vehicle
April 21 (UPI) -- Firefighters in Canada came to the rescue of a dog who knocked their owner's vehicle out of park and took an accidental joyride.

Odd News // 23 hours ago
Man bowls a perfect game with ball containing his father's ashes
April 21 (UPI) -- An Illinois man paid tribute to his deceased father by bowling a perfect 300 game using a ball that contained some of his dad's ashes.

Odd News // 1 day ago
Barbary sheep escapes from Puerto Rico's largest zoo
April 21 (UPI) -- Residents of a Puerto Rican town said they are keeping their eye out for an aoudad -- a large wild sheep -- after the animal escaped from a local zoo. 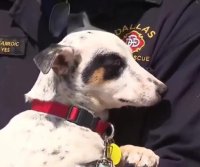 Odd News // 1 day ago
Dog rescued from SUV engine, adopted by firefighter
April 21 (UPI) -- A stray dog that climbed up into the engine compartment of a parked car in Dallas found a new home with the firefighter who rescued her.