NEW YORK, Feb. 18 (UPI) -- A New York man is facing charges he stole a six-story apartment building and then tried to get a $1 million mortgage on it, city officials said Wednesday.

Fernando Maldonado, 47, of Brooklyn allegedly filed a phony deed with the New York City Finance and Buildings departments and then tried to defraud a lender, the city said in a news release. He now faces numerous charges that could land him behind bars for years, city officials said.

"Stealing a building and using it in an effort to steal more than a million dollars in loan money, as charged here, is about as brazen a scam as can be imagined," city Investigation Department Commissioner Rose Gill Hearn said. "But with a paper trail of phony documents, and a string of charges that can lead to substantial prison terms, the foolishness of the scheme has been exposed."

Maldonado allegedly was able to move his scheme forward because he previously had been president of the property's cooperative board and his name appeared on the original deed. But he hadn't even been a tenant of the building since 1992.

TAMPA, Fla., Feb. 18 (UPI) -- A University of South Florida official announced he will resign after he was accused of stealing a $100 bike that was parked at the school.

Abdul Rao, senior associate vice president for research, said Tuesday that he has signed a document stating that he will leave his $384,280-per-year position at the school Friday, the St. Petersburg (Fla.) Times reported Wednesday.

Rao previously said in a statement that he took the bike from a parking area on the loading dock of the Johnnie B. Byrd Sr. Alzheimer's Center and Research Institute to help a day laborer in need of transportation, The Tampa (Fla.) Tribune reported.

The security tape of the incident, which was later posted on Youtube, shows a woman leaving a red mountain bike in the parking area at 2 p.m. Monday. At about 8:50 p.m., Rao and another man arrive in a van and look at the bicycles before choosing the bike left by the woman and loading it into the van.

Christine Dillingham, the woman who parked the borrowed bike at the school, told the St. Petersburg Times that she "basically wanted to see (Rao) take responsibility for his actions. Stepping down seems to show he did that."

Timothy Boyd, who had loaned the bike to Dillingham, said Rao told him after the bike was returned that he had only intended to borrow it for one day. However, Boyd said he wants Rao charged with theft.

The dossier, which records a high-ranking Nazi prisoner's conversation with a British agent May 3, 1945 -- three days after Hitler's death -- was discovered recently during a routine house clearance in southwest England, The Sun reported Wednesday.

The document accuses Hitler of possessing atrocious table manners, including biting his fingernails, fidgeting with his mustache and breaking wind in between mouthfuls of food, the newspaper said.

"Hitler eats rapidly, mechanically. For him food is merely an indispensable means of subsistence," the Nazi officer is quoted as saying. "At the table and in his speech he shows many facets of rather uncouth behavior. He abstractedly bites his fingernails, he runs his index finger back and forth under his nose, and his table manners are little short of shocking."

Auctioneer Richard Westwood-Brookes, who is set to sell the document next month in Ludlow, England, said the item is expected to fetch more than $1,000.

"It is a highly important document," he told The Sun.

LONDON, Feb. 18 (UPI) -- A British union said shirts issued to female transport workers have been sent back due to thin fabric that "left little to the imagination."

Brian Brock, an official with the Transport Salaried Staffs Association, said new blouses issued to female workers on the National Express's East Coast line between London and Edinburgh, Scotland, were sent back to the National Express after they were found to be too thin and "left little to the imagination," The Daily Mail reported Wednesday.

"The blouses are simply too thin and too cheap. This is yet another example of National Express cutting costs at every corner," Brock said.

A National Express spokesman said the complaints are being investigated.

"We have undertaken wearer trials for the past six months and this issue did not arise," he said to The Daily Mail. "We will of course change the fabric of the shirts if there is a problem. We are now liaising with the manufacturer."

Odd News // 12 hours ago
Stuck cat rescued from underneath car in Florida
May 24 (UPI) -- Authorities in Florida came to the rescue of a cat that became stuck while apparently attempting to climb into the undercarriage of a vehicle.

Odd News // 14 hours ago
15,000 bees removed from equipment at New Orleans airport
May 24 (UPI) -- A team of bee removal experts were summoned to Louisiana's largest airport to remove more than 15,000 swarming insects that had taken up residence on a piece of equipment.

Odd News // 15 hours ago
Raccoon gets stuck head-first in California home's roof
May 24 (UPI) -- A California animal shelter helped a local homeowner with an unusual problem: a raccoon with its head stuck through a hole in the roof.

Odd News // 16 hours ago
Baby deer rescued from Texas storm drain
May 24 (UPI) -- Emergency responders in Texas came to the rescue of a baby deer that became trapped in a city storm drain. 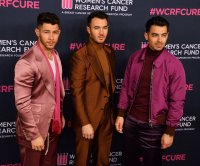