Capt. Thomas Pedersen said the military released the documents after growing weary of journalists asking questions about them, the Copenhagen Post reported Friday.

"We decided to publish the archives because frankly there is nothing really secret in them," Pedersen said. "The Air Force has no interest in keeping unusual sightings a secret. Our job is to maintain national security, not investigate UFOs."

The Air Force said the archives contain details of unexplained events occurring between 1978 and 2002, before the job of chronicling UFO sightings went to a group called Scandinavian UFO Information.

Odd News // 11 hours ago
Unusual cylindrical vessel washes up with runner on Florida beach
July 26 (UPI) -- Sheriff's deputies called to investigate an unusual object on a Florida beach discovered the item was a floating cylinder being used by a man attempting to run to Bermuda. 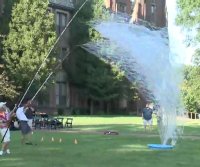 Odd News // 14 hours ago
Four horses escape from Colorado rodeo, go running on highway
July 26 (UPI) -- Police and firefighters in Colorado ended up in an unusual high-speed chase when four horses escaped from a rodeo and went for a run on the interstate.