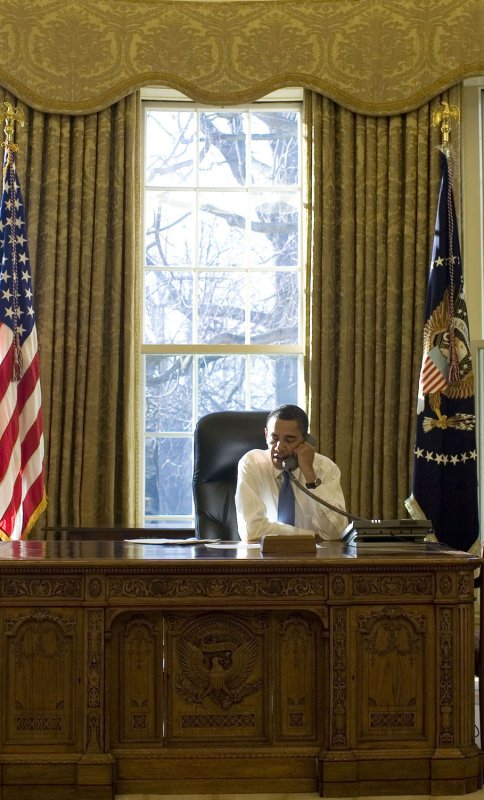 In eight years of official Oval Office photos of former President George W. Bush, not one can be found of him without a suit jacket on, CNN reported.

The broadcaster said it seems to be one of the first of Bush's regulations to be scrapped by Obama.

Odd News // 7 minutes ago
Lost hiker ignored rescuers' calls, assumed unknown number was spam
Oct. 26 (UPI) -- A Colorado search and rescue team said a hiker lost on a mountain trail for about 24 hours didn't answer phone calls from the team because they assumed the calls were spam.

Odd News // 2 hours ago
Louisiana neighbors surprised by wandering zebra
Oct. 26 (UPI) -- Residents of a rural area in Louisiana captured photos and videos when a zebra that was unhappy about its new pasture went for a run on the loose.

Odd News // 22 hours ago
Police rescue dog from Florida canal
Oct. 25 (UPI) -- Police in Florida came to the rescue of a dog that fell into a canal and found itself unable to climb out without assistance.

Odd News // 22 hours ago
Michael Jordan's rookie year shoes sell for record $1.47M
Oct. 25 (UPI) -- A pair of Nike shoes worn by Michael Jordan during his rookie season with the Chicago Bulls sold for a record-breaking $1.47 million at a Las Vegas auction.

Odd News // 23 hours ago
Lithuanian man sits in ice for 3 hours to break world record
Oct. 25 (UPI) -- A Lithuanian man put his endurance to the test by spending 3 hours and 1 minute submerged up to his neck in ice to break a Guinness World Record.

Odd News // 1 day ago
ER nurses get engaged in elaborate hospital roof proposal
Oct. 25 (UPI) -- A pair of ER nurses who fell in love at the Georgia hospital where they both work became engaged in an elaborate proposal on the roof of the building.