Andrew Thompson said Portlyn Miller, 21, entered his St. Paul house three times while he was not home in October and committed acts of vandalism, including covering the inside of his house with pink and green paint and stabbing one of his daughter's teddy bears, the St. Paul Pioneer Press reported Wednesday.

Miller has been charged with burglary and vandalism, but police have not been able to locate her.

Thompson said Tuesday he has repainted and carpeted his home, but paint remains on wood trim, the bathroom grout, lamps, railings and the inside of the oven. He said the house is now in foreclosure and he has been unable to show it because of the damage.

"It's a nightmare, dude. That's all I can say," Thompson said.

He said he is hoping police can locate Miller so he can get restitution payments.

"Right now, I'm just waiting to see if she shows up," he said.

Whiskey collector to keep most bottles

GOODLETTSVILLE , Tenn., Jan. 7 (UPI) -- A Jack Daniel's collector said he has reached a deal with Tennessee liquor control authorities that will allow him to keep most of his 2,400-bottle collection.

Raymond Fraley Jr., a lawyer for Randy Piper, said his client will forfeit several hundred of the least-valuable bottles from his collection to the Tennessee Alcoholic Beverage Commission, which will auction the whiskey, The (Nashville) Tennessean reported Wednesday.

Piper's collection was seized in October 2007 after Alcoholic Beverage Commission agents caught him selling a $350 bottle of special reserve whiskey, signed by a master distiller, to a fellow collector.

"The underlying investigation was for the sale of alcoholic beverages without a license," ABC Executive Director Danielle Elks said. "Their defense was that these are collectibles, but the law says people should not be selling alcohol without a license."

Under the deal, Piper also agreed to pay a $15,000 fine and pledged not to violate any liquor distribution rules in the future.

"His identity was compromised," Diocese of Brooklyn spokesman the Rev. Kieran Harrington said.

But no bad deed goes unpunished, and the thieves unwittingly erred when they applied for new MasterCard credit cards in DiMarzio's name.

"The bishop has an account with MasterCard, so they called him and asked him, 'Did you order new cards?'" Harrington said.

After telling the company no, he called the police, who are investigating.

"Crooks have no regard for anyone," a police source told the Daily news, "even a man of the cloth."

ELIZABETH CITY, N.C., Jan. 7 (UPI) -- A North Carolina 8th grader said he was forced to get a haircut after school administrators said a star shape in his hair was a gang symbol.

Jay Cowell said officials at River Road Middle School in Elizabeth City told him he had to change his hairstyle because the star shape could be interpreted as a gang sign, WAVY-TV, Portsmouth, Va., reported Wednesday.

"It was a really nice design and they're going to make me take it out of my head," Cowell said. He said the design was "for God and all the stuff he made on the Earth."

Cowell's mother, Natasha, said she met with the principal of the school and the district superintendent.

"The only thing they kept saying is 'we know Jay,' so we know what this means, so we're not suspending him, but he can't return until it's gone," she said.

The star image was designed by Rondell Parker, the boy's barber.

"His mom told me he's an A/B student, so I thought of something that could be in the sky for him, reaching for the sky," Parker said.

Cowell returned to school Tuesday afternoon after a haircut. 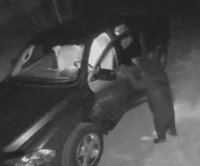