Dragonfly 'smiles' for the camera

DERBYSHIRE, England, Sept. 20 (UPI) -- A close-up photo of a dragonfly taken this week by a rock climber in Derbyshire, England, appears to show the insect smiling broadly.

In fact, it's just the colorful markings on the "frons," or frontal head and mouth parts, of the female Southern Hawker Aeshna cyanea that makes it look that way, experts told The Daily Telegraph Saturday.

The "smiling dragonfly" was photographed on a cell phone by Nottingham City Council worker Mark Manders, 34, who says he found the insect -- which has a wingspan of nearly 4 inches -- while rock climbing in the Peak District in Derbyshire.

"It was so huge, I thought it was quite unusual," he told the British newspaper. "To see one that big, and I think it was laying eggs too."

Katharine Parkes, a conservation officer for the British Dragonfly Society, told the Telegraph the dragonflies are not easily frightened and are inquisitive.

"They are also very territorial, so if you enter their area, they want to come up and have a look at you," she added. 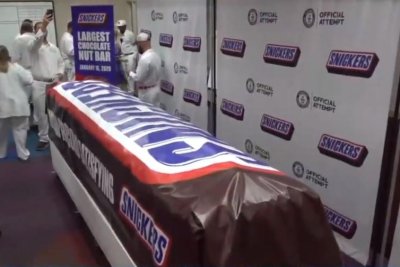