LONGVIEW, Texas, Aug. 15 (UPI) -- Police in Longview, Texas, have arrested a woman who allegedly had her 12-year-old daughter drive her to a bar.

Investigators said the 12-year-old was stopped for a traffic violation while she was pulling a blue minivan into her family's driveway Wednesday and the girl told the officer she had just returned from dropping off her mother, Jennifer Rosenburg, 35, at Leon's Steak House, the Longview News-Journal reported Friday.

Rosenburg, whose birthday was Wednesday, admitted to police that her daughter had driven her to the bar, officers said. She was arrested on child endangerment charges and jailed in lieu of $2,500 bond.

Police said the incident is also being investigated by Child Protective Services.

Odd News // 1 hour ago
Illinois man has kept Richard Nixon's unfinished sandwich for 60 years
Sept. 22 (UPI) -- An Illinois man is celebrating the 60th birthday of an unusual keepsake -- a sandwich that he has kept frozen ever since it was half-eaten by Richard Nixon in 1960.

Odd News // 2 hours ago
Watch: Cowboy arrested for riding horse onto busy Chicago highway
Sept. 22 (UPI) -- A Chicago cowboy who recently made appearances with Mayor Lori Lightfoot to promote the U.S. Census was arrested when he rode his horse onto a busy highway.

Odd News // 2 hours ago
Watch: Dolphin rescued from pond 9 miles inland after hurricane
Sept. 22 (UPI) -- Marine rescuers in Texas shared video from the rescue of a dolphin that was stranded in a pond 9 miles inland by a storm surge from Hurricane Laura.

Odd News // 22 hours ago
Couple to get matching tattoos of winning lottery numbers
Sept. 21 (UPI) -- An Australian couple who scored a lottery jackpot of more than $500,000 said they already decided what their first purchase will be: matching tattoos of their winning numbers.

Odd News // 22 hours ago
Curious puppy rescued from backyard drain cover
Sept. 21 (UPI) -- Firefighters in Pennsylvania came to the rescue of a puppy who went wandering in her owner's back yard and ended up with her head stuck through the middle of a drain lid. 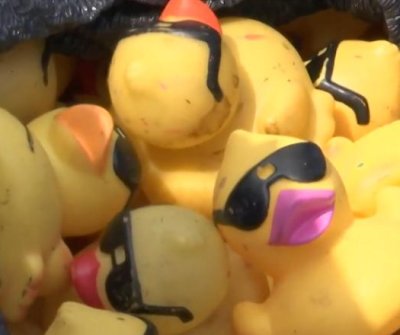 Odd News // 22 hours ago
Watch: Texas city attempts world record for line of rubber ducks
Sept. 21 (UPI) -- A Texas city's annual Rotary Duck Derby, delayed for months due to the COVID-19 pandemic, went forward without some of the usual fanfare, but with a Guinness World Record for lining up rubber ducks.