GREENACRES, Fla., July 1 (UPI) -- A Greenacres, Fla., woman allegedly kidnapped a family's cat after they refused to return a dog they adopted that the woman had previously owned, police said.

Investigators said Linda Urioste's black Labrador, Scooby, was picked up by Animal Control in May and was adopted five days later by Jutta Hollar and her husband, WPBF-TV, Palm Beach, Fla., reported Tuesday.

Hollar said she considered returning the dog, now named Buddy, to Urioste after the woman stopped by Animal Care and Control to look for him, but she and her husband decided to keep Buddy after the woman was "very rude and yelled at us and treated us really not very nice" during a meeting.

She said her cat, Mitz, went missing a few days after the meeting and she soon received a phone call from Urioste stating that she had the cat. Police said Urioste admitted to having the cat but refused to return it unless Hollar gave her the dog.

Urioste was arrested and charged with theft and extortion. Mitz was returned safely to her family.

Odd News // 19 hours ago
Horse hoisted upside-down from cesspit
March 31 (UPI) -- Firefighters in England said they had to enlist the help of a local veterinary company to bring in heavy machinery for the rescue of a horse that fell into a dry cesspit.

Odd News // 19 hours ago
Oregon man wins $6.3 million from free lottery ticket
March 31 (UPI) -- An Oregon man's $6.3 million lottery jackpot was made all the more lucky by the fact that his ticket was free -- and he almost left it at the store.

Odd News // 21 hours ago
Lost wedding ring found buried 20 years later
March 31 (UPI) -- A metal detector operator searching a 300-acre property in England found a wedding ring that turned out to have been lost by a former neighbor 20 years earlier.

Odd News // 21 hours ago
Leopard captured after wandering into house in India
March 31 (UPI) -- Wildlife officials in India said a leopard wandered into a city and was captured about five hours after it was spotted inside a house.

Odd News // 1 day ago
Snowmobilers rescue moose from tree well in Newfoundland
March 31 (UPI) -- A group of friends out snowmobiling in Newfoundland ended up rescuing a moose that fell into a tree well, and the incident was caught on video.

Odd News // 1 day ago
Woman in-line skates backward in heels for Guinness record
March 31 (UPI) -- A Canadian circus performer was awarded a Guinness World Record when she strapped on a pair of high-heeled inline skates and skated 328 feet in 21.52 seconds -- while facing backward. 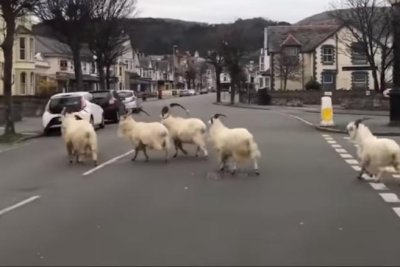