In 1889, some 20,000 homesteaders massed along the border of the Oklahoma Territory, awaiting the signal to start the Oklahoma land rush.

In 1914, Babe Ruth made his professional baseball debut, as a pitcher for the Baltimore Orioles.

In 1972, Apollo 16 astronauts John Young and Charles Duke walked and rode on the surface of the moon for 7 hours, 23 minutes.

In 1990, Muslim extremists in Lebanon freed a U.S. hostage for the first time in more than three years, releasing college professor Robert Polhill after 39 months in captivity.

In 1991, at least 70 people were killed and 500 more injured when an earthquake measuring 7.4 on the Richter scale struck Costa Rica.

In 1993, Gov. Guy Hunt, Alabama's first Republican governor since the Reconstruction, was removed from office after being convicted of felony ethics violations.

In 1994, Richard Nixon, the 37th U.S. president and the only U.S. president to resign his office, died four days after suffering a stroke. He was 81.

In 1997, a 126-day standoff at the Japanese Embassy in Lima ended when Peruvian commandos stormed the building and freed 72 hostages held by the Tupac Amaru Revolutionary Movement. All 14 rebels were killed.

In 2000, in a predawn raid, armed U.S. immigration agents broke into the Miami house where Elian Gonzalez had been staying and took charge of the 6-year-old Cuban refugee, flying him to Washington to be reunited with his Cuban father.

In 2003, hundreds of thousands of Shiites journeyed to Karbala for annual religious observances banned under Saddam Hussein and many called on Americans to go home.

In 2004, former NFL star Pat Tillman, who turned down a lucrative contract with the Arizona Cardinals to join the U.S. Army Rangers, was killed in Afghanistan. The U.S. military said later he was a victim of friendly fire.

In 2005, Zacarias Moussaoui, the only man charged in the United States in connection with the Sept. 11, 2001, terror attacks, pleaded guilty and was sentenced to life in prison.

Also in 2006, incumbent Mayor Ray Nagin was the top vote getter in a field of 21 as New Orleans voters held their first post-Katrina election. He later won a runoff with Lt. Gov. Mitch Landrieu.

In 2007, gunmen in the Iraqi city of Mosul killed 23 followers of Yazidi, a religious minority, after they were pulled from their bus. Individuals of other faiths were unharmed.

Also in 2007, Nicolas Sarkozy and Sergolene Royal finished 1-2 in the French presidential election and headed for a May 6 runoff. Sarkozy won the runoff.

A thought for the day: Confucius said, "I hear and I forget. I see and I remember. I do and I understand."

Odd News // 16 hours ago
Paper plane takes record-breaking 252-foot flight in South Korea
May 19 (UPI) -- A trio of paper aircraft enthusiasts broke a Guinness World Record in South Korea when they sent a folded plane for a flight of 252 feet, 7 inches.

Odd News // 17 hours ago
Officials working to capture escaped bison in Illinois
May 19 (UPI) -- Forest preserve officials in Illinois said they aim to have a bison on the loose since September 2021 captured safely by the end of May. 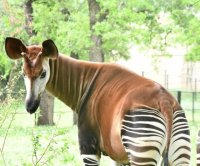 Odd News // 22 hours ago
Endangered okapi at Oklahoma City Zoo is pregnant
May 19 (UPI) -- The Oklahoma City Zoo and Botanical Garden has announced that its adult female okapi, named Kayin, will be giving birth to her first calf this fall.