DORCHESTER, Wis., Aug. 31 (UPI) -- A man without legs and one of his friends were both arrested for driving the same vehicle while intoxicated in Dorchester, Wis.

Harvey J. Miller, 43, who has no legs, was steering the vehicle while Edwin H. Marzinske, 55, operated the pedals, The Marshfield News-Herald reported.

Both were issued citations for drunk driving. It was the third offense for Miller and the second for Marzinske, but both were also cited for driving after revocation.

Another drunk man who was in the vehicle walked home after the Aug. 18 incident.

LAFAYETTE, Ind., Aug. 31 (UPI) -- A woman from Lafayette, Ind., has been arrested for allegedly letting her 5-year-old son drive her around while she was intoxicated.

Holly Schnobrich, 24, was charged with two counts of felony neglect and public intoxication after neighbors noticed her son trying to drive her around in their car, WRTV Indianapolis reported.

The boy and his 3-year-old brother were placed into the custody of the Department of Child Services, police said.

The Tippecanoe County, Ind., Sheriff's Department said authorities were called Sunday after neighbors told them they saw the boy behind the wheel.

"It was just bizarre," a police officer told WRTV. "I asked, 'Is this toddler driving your car?' She said, 'He's a good driver.'"

The child reportedly told police he was having trouble because he couldn't reach the pedals.

The Student Government Association says Article 1, Section 1, Letter J of the ISU Constitution states that students have "the right to be free from any mandatory dress code.” They say that includes the marketing department's requirement that all students wear business-casual attire, The Bloomington (Ill.) Pantagraph reported.

The policy, which had been adopted in some marketing courses as early as 2003, was expanded to cover the business school's entire department to help promote professional conduct and prepare students for the business world.

Mike Johnson and Andy Wright are marketing their $9.99 Beer Pong Rubbers online, with triangular shaped rubber mats that prevent plastic beer cups from slipping or moving while the drinking game is played, The Chicago Sun-Times reported.

Beer Pong is played by two teams facing one another at a 6- to 8-foot-long table. Players try to throw or bounce a Ping Pong ball into the opponents' plastic glass -- and if they succeed, the beer's owner must down the entire cup in one go.

The team that has no cups left loses.

"I think the engineering side at Northwestern helped us through the design and development and the patent protection," Johnson told the newspaper.

Johnson acknowledged mounting concern in U.S. schools about binge-drinking but said his education hadn't been based solely on the mats.

"It's funny because we came out with the product at the same time Andy and I were working on a medical device to prevent sleep apnea in premature babies," he said to the Sun-Times.

Odd News // 9 hours ago
Kitten saved from traffic takes 80-mile Uber ride to rescue
May 17 (UPI) -- A kitten rescued from traffic by a Florida woman ended up taking an 80-mile ride in an Uber to an animal rescue facility. 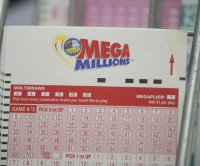 Odd News // 10 hours ago
Singapore coffee shop workers find large python in toilet
May 17 (UPI) -- Workers at a coffee shop in Singapore received a scare when they went to investigate a noise in the bathroom and found a large snake slithering in a toilet. 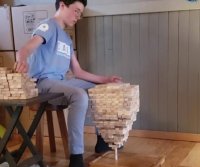 Odd News // 11 hours ago
British Columbia boy doubles own world record for Jenga stacking
May 17 (UPI) -- A British Columbia boy with a gift for balance broke his own Guinness World Record by stacking 1,400 Jenga blocks on a single block -- more than doubling his previous record.

Odd News // 12 hours ago
60-year-old braids of hair donated to Michigan charity
May 17 (UPI) -- A Michigan woman who received some braids of hair from her aunt when she was 12 years old donated the 60-year-old locks to a charity that makes wigs for children.