In 1859, the first successful oil well in the United States was drilled near Titusville, Pa.

In 1883, the most powerful volcanic eruption in recorded history occurred on Krakatoa, a small, uninhabited island located west of Sumatra in Indonesia.

In 1928, the Kellogg-Briand Pact, outlawing war as a means to settle international disputes, was signed by 15 nations in Paris. World War II began 11 years later.

In 1939, Adolf Hitler served notice on England and France that Germany wanted Danzig and the Polish Corridor.

In 1977, IRA terrorists killed Louis Mountbatten, a cousin of the queen, by blowing up his boat. It was the IRA's first attack on the royal family.

In 1991, the Soviet republic of Moldavia declared independence and the European Community recognized Estonia, Latvia and Lithuania as independent nations.

In 1992, Serbian leaders at the Yugoslav peace conference pledged to close the prisoner-of-war camps, end "ethnic cleansing" and work toward peace.

Also in 1992, Canada's Supreme Court struck down as unconstitutional a law that would have prevented a man from claiming the Nazi Holocaust was a hoax.

In 1996, Israel approved new development in the West Bank.

In 1999, two Russian cosmonauts and a French astronaut left Mir to return to Earth, leaving the orbiting Russian space station unmanned for the first time in 13 years.

In 2003, the United States and North Korea met privately in Beijing during the six-nation talks on Pyongyang's nuclear program. Diplomats said there was no breakthrough in the talks.

In 2004, Russian authorities said traces of explosives were found in the wreckage of two airliners that crashed within minutes of each other after takeoff earlier in the week in Moscow, heightening suspicion of terrorism. A total of 89 people died in the crashes.

In 2005, the Gulf Coast between New Orleans and the Florida Panhandle was battening down for the second landfall of Hurricane Katrina, a Category 3 storm and strengthening.

In 2006, reports said hundreds of tribal chiefs signed a pact supporting reconciliation and an end to sectarian strife in Iraq while bombs and gunfire killed 100 Iraqis over a two-day period.

A thought for the day: in her novel "Molly Bawn," Margaret Wolfe Hungerford wrote, "Beauty is in the eye of the beholder."

Odd News // 10 hours ago
Watch: Man spotted wearing live snake as a mask on city bus
Sept. 17 (UPI) -- Transportation officials in a British city responded to viral photos from a municipal bus by reminding residents that snakeskin is not a good material for face masks -- especially when still attached to a snake.

Odd News // 11 hours ago
Wildlife officials: Tennessee 'tiger' likely a native bobcat
Sept. 17 (UPI) -- Wildlife officials in Tennessee said they now believe reports of a tiger on the loose in the Knoxville area are the result of mistaken identity.

Odd News // 13 hours ago
Reported stranded dolphin in Britain was a big tuna
Sept. 17 (UPI) -- Coastguard crews responded to an estuary on a report of a possible dolphin stranded in shallow waters -- but arrived to find the wandering creature was actually a 10-foot tuna. 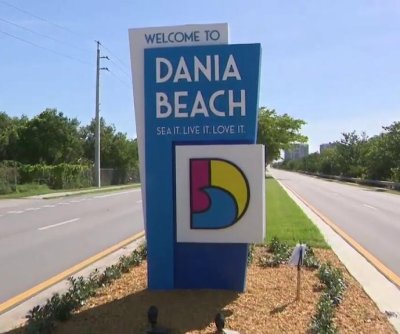 Odd News // 14 hours ago
Watch: Iguana found wandering loose in Colorado state park
Sept. 17 (UPI) -- A Colorado State Parks employee responded to a call about an unusual animal and was surprised to find exactly what the caller described: an iguana wandering loose in a park.

Odd News // 16 hours ago
Wooden Melania Trump statue replaced with bronze after arson
Sept. 17 (UPI) -- A wooden statue of Melania Trump that was damaged by an arsonist in July has been replaced by a bronze version near the first lady's hometown in Slovenia.