The study said that the average U.S. citizen eats about 200 sandwiches a year, and the average child will eat around 1,500 peanut butter-and-jelly sandwiches before graduating from high school, Texas A&M found.

The difference between a healthy and unhealthy sandwich was also brought to question.

"There's nothing wrong with most sandwiches but it all depends on what you put on them and serve with them," said Steven Riechman, assistant professor of health and kinesiology at Texas A&M University.

"You have to start off the right way -- with the bread and meat. The bread should preferably be whole grain, not white. The whites have the highest calories and lowest fiber content," he said. "And the leaner the meat, the better."

Odd News // 3 hours ago
Venomous snake found in lettuce package from Australian store
April 14 (UPI) -- A grocery store chain said it is investigating after an Australian customer found a venomous snake inside the plastic bag with her pre-packaged lettuce. 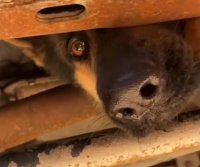 Odd News // 4 hours ago
Texas emergency responders free dog trapped in truck's undercarriage
April 14 (UPI) -- Police, firefighters and animal control officers responded to a Texas home where a man's German shepherd climbed into the undercarriage of his truck and got stuck.

Odd News // 5 hours ago
Restaurant offers year of free burgers to customers who get tattoos
April 14 (UPI) -- A California-based restaurant chain is offering customers free burgers for a year if they get hamburger tattoos bearing the eatery's name.

Odd News // 6 hours ago
Busch beer offers $20,000 for a canine 'chief tasting officer' to sample Dog Brew
April 14 (UPI) -- The makers of Busch beer announced they are seeking a very good boy or girl to make $20,000 by serving as "chief tasting officer" for Dog Brew, a "beer" made for dogs.

Odd News // 6 hours ago
Guinness record holder gets first haircut in 12 years, donates locks to museum
April 14 (UPI) -- An Indian woman who set the Guinness World Record for the longest hair on a teenager received her first haircut since age 6 and donated the cut hair for display at the Ripley's Believe It or Not! Museum.