"I thought it wasn't anything to worry about, there are pictures of naked girls in that magazine every month without it causing any fuss," she said.

Lek calls her a "sexy sports talent," and Norwegian newspapers and television stations want to meet the sexually liberated girl who is pictured in Lek.

"This is just terrible. I never got to check the interview and I still haven't seen it. But I have heard some excerpts and I don't recognize myself," Engesland said. "I am very surprised that there has been so much fuss, I am not famous at all. Now that I see the consequences I truly regret doing it."

The University of Denver Web site lists Engesland's age as 24, but Aftenposten said she is 22. She was a member of the Norwegian national team in 2001 and 2004.

Evidently, she's not happy to be getting more attention for the photo spread than for her performance on the slopes.

"I want to be remembered as a skier," she said.

Odd News // 10 hours ago
Australian vacationer returns home to discover $1.4 million lottery win
Dec. 8 (UPI) -- An Australian man who bought a lottery ticket just before taking a vacation said he didn't discover until he returned home more than a week later that he was a $1.4 million winner. 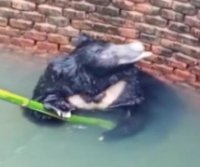 Odd News // 11 hours ago
Sloth bear rescued from well in Indian village
Dec. 8 (UPI) -- Wildlife authorities in India rescued a sloth bear that fell into a well while feasting on sugarcane in a village.

Odd News // 12 hours ago
More than 40 camels disqualified from Saudi contest over Botox, enhancements
Dec. 8 (UPI) -- Organizers of a beauty contest for camels in Saudi Arabia said 43 animals have been disqualified for receiving Botox treatments, face lifts and other cosmetic procedures.