ITHACA, N.Y., May 31 (UPI) -- Cornell University is being sued for firing a farmhand who refused orders to stop feeding feral cats at the school's animal training farm.

John Beck, 67, filed a $20 million lawsuit after being fired from the overnight shift at the 2,600-acre Animal Science Teaching and Research Center in August 2003.

He said he ignored a warning letter to stop feeding about 20 of the cats, and says other farmhands were doing it too.

Beck, who milked cows at the farm's dairy barn, used his own money to buy kibble, and took some of the barn cats to the SPCA shelter for adoption and had others fixed at the university's veterinary school.

He told the New York Post because the cats had come to rely on the farm as a source for food, they deserved to be fed.

"That's what the farm is there for, to take care of animals, not mistreat them," said Beck.

Odd News // 1 hour ago
Boredom steers Maryland woman to $25,000 lotto win
May 20 (UPI) -- An unidentified woman in Maryland cured her boredom by buying a lottery ticket that led to $25,000 in winnings.

Odd News // 19 hours ago
Paper plane takes record-breaking 252-foot flight in South Korea
May 19 (UPI) -- A trio of paper aircraft enthusiasts broke a Guinness World Record in South Korea when they sent a folded plane for a flight of 252 feet, 7 inches.

Odd News // 19 hours ago
Officials working to capture escaped bison in Illinois
May 19 (UPI) -- Forest preserve officials in Illinois said they aim to have a bison on the loose since September 2021 captured safely by the end of May. 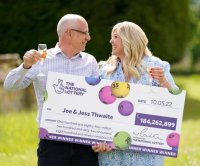