PHILADELPHIA, March 3 (UPI) -- A Philadelphia family of four is accused of thrashing two trash collectors after their garbage wasn't picked up.

Police said Eugene Dykes Sr., his wife, his son and a cousin beat up the garbage collectors, WCAU-TV, Philadelphia, reported.

Sanitation worker Richard Myers said it all started when he and his partner, Kareem Govan, were picking up garbage on Tuesday.

Myers said the family didn't have their garbage out when they drove by, so the truck kept going. He said that's when Dykes Sr., came out of the house and confronted Myers and Govan.

Later, Myers said the man's wife, son and cousin also came out of the house and started attacking the two workers, the report said.

Myers and Govan were recovering from their injuries. All four suspects are charted with aggravated assault, making terrorist threats and conspiracy.

Odd News // 17 minutes ago
Wisconsin Supreme Court justice sworn in during 100-mile run
Aug. 3 (UPI) -- A Wisconsin woman took a break from her 100-mile ultramarathon run at mile 35 to be sworn in as a justice of the state Supreme Court.

Odd News // 2 hours ago
Deputies on horseback lasso loose bull in Florida
Aug. 3 (UPI) -- Deputies in Florida were summoned to a stretch of highway to lasso a loose bull that was posing a hazard to rush-hour traffic. 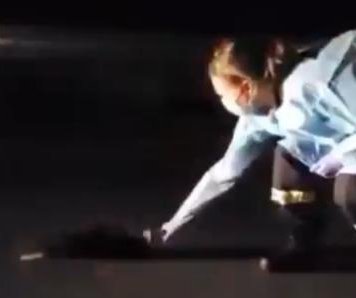 Odd News // 3 days ago
Leopard wanders through town after game preserve escape
July 31 (UPI) -- A leopard escaped from a game preserve in South Africa and was spotted wandering through streets and residential yards before being recaptured.