The ad in The Washington Times was sponsored by the American Civil Liberties Union, the American Conservative Union and the Islamic Free Market Institute Foundation.

Similar ads are running in Alaska, Wisconsin and Utah.

In the Senate, the leading legislation is the Collins-Lieberman "National Intelligence Reform Act of 2004," which closely mirrors the commission's findings and contains none of the provisions of the draft "Patriot Act 2" legislation leaked from the Justice Department last year, the ACLU said.

The Senate is expected to vote on this legislation as early as Wednesday.

Ian Wilmut, who works at the Roslin Institute in Edinburgh, wants to find a cure for motor neuron disease, Sky News reported Tuesday.

Wilmut says he wants to produce cloned embryos entirely for research purposes; as soon as an experiment is completed the embryo will be destroyed.

Specifically, Wilmut says he wants to discover what goes wrong in the nerve cells of people who suffer from motor neuron disease. If successful he believes the research could have profound implications for many neurological and genetic disorders, Sky News said.

Motor neuron disease is the name given to a group of related diseases affecting the motor neurons in the brain and spinal cord. Motor neurons are the nerve cells along which the brain sends instructions in the form of electrical impulses to the body's muscles.

LONDON, Sept. 28 (UPI) -- A British survey has found almost half the nation's adult population has cheated on his or her partner, the Daily Mail reported Tuesday.

The ICM survey said of 643 people between the ages 25 and 34, 47 percent admitted to being unfaithful at some point in a relationship.

A fifth of those questioned said they had cheated on their current partners. Men were more "active" than women with 25 percent admitting to straying, compared to 15 percent of women. And out of those who confessed to being unfaithful, 92 percent revealed they were repeat offenders.

Illicit liaisons were not confined to those in short-term relationships: 16 percent of people who were either married or living with someone had been unfaithful to their current partner.

Despite the high proportion of infidelity, 78 percent of women and 55 percent of men thought cheating was immoral.

Seventy-three percent of the cheaters regretted being unfaithful, but 24 insisted they didn't feel guilty. And a defiant 6 percent thought having sex with someone else did not constitute cheating.

Regional differences were striking: 29 percent of Londoners said they were prepared for an "open relationship," compared to 5 percent in the north.

LONDON, Sept. 28 (UPI) -- E-mail, voice mail and text messages make it easier to flirt in the workplace, a British survey has found.

Thirty-one percent of 221 workers surveyed said they have had "physical and emotional" intimacy with a co-worker, and many said their relationship started with e-mail, the Telegraph reported.

Electronic messages enabled the workers to carry on secretly, according to the survey of men and women aged 21 to 40 published in a new book, "Intimacy," by Andrew and Nada Kakabadse.

"A number of respondents view e-mail as a seductive tool, as messages can be more easily sent while ensuring perceived higher levels of confidentiality," they wrote. "But others in the study consider IT as a negative mode of communication and highlight the increased possibility of sexual harassment."

Workplace psychologist Judi James warns that co-workers should think long and hard before establishing an office relationship. "You have to think about what would happen if you broke up," she said.

Odd News // 26 minutes ago
Bear follows 12-year-old boy on hiking path
May 27 (UPI) -- A family out for a hike in northern Italy captured video of the moment a brown bear followed a 12-year-old boy down a mountain path.

Odd News // 20 hours ago
Police respond to report of big cat on the loose in London
May 26 (UPI) -- Police responded to an affluent London neighborhood on a report of a "big cat" with cheetah-like markings and determined the animal was a domesticated Savannah cat.

Odd News // 21 hours ago
Ohio state troopers stop highway traffic for goose family crossing
May 26 (UPI) -- Ohio state troopers responded to a stretch of highway to stop traffic and rescue a family of stranded geese spotted by a state representative. 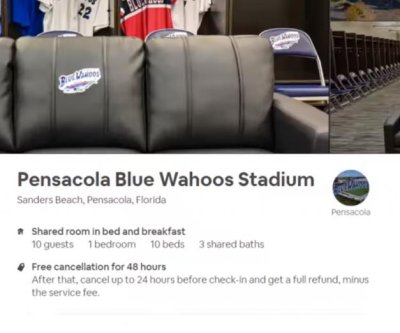 Odd News // 23 hours ago
Florida baseball team lists stadium on Airbnb
May 26 (UPI) -- A minor league baseball team in Florida is putting its stadium to good use amid a delayed season by renting out the property on Airbnb.