The moon is waning. The morning stars are Venus, Uranus, Saturn and Neptune. The evening stars are Mercury, Jupiter, Mars and Pluto.

In 1925. the so-called "Monkey Trial," in which John Scopes was accused of teaching evolution in school, a violation of state law, began in Dayton, Tenn., featuring a classic confrontation between William Jennings Bryan, the three-time presidential candidate and fundamentalist hero, and legendary defense attorney Clarence Darrow.

In 1938, industrialist Howard Hughes and a crew of four flew around the world in 91 hours, setting a speed record.

In 1962, the pioneer telecommunications satellite Telstar began relaying TV pictures between the United States and Europe.

In 1985, Coca-Cola, besieged by consumers dissatisfied with the new Coke introduced in April, dusted off the old formula and dubbed it "Coke Classic."

In 1987, Greenpeace's "Rainbow Warrior" was sunk in the Aukland, N.Z., harbor by French agents in diving gear who planted a bomb. One person died in the blast.

In 1989, Mel Blanc, the voice of Bugs Bunny, Daffy Duck and countless other Warner Bros. cartoon characters, died from complications of heart disease.

In 1991, President Bush lifted U.S. trade sanctions against South Africa, making it possible for the two nations to engage in trade.

Also in 1991, in Moscow, Boris Yeltsin was inaugurated as the first freely elected president of the Russian republic.

In 1992, former Panamanian dictator Manuel Noriega was sentenced to 40 years in prison for cocaine racketeering.

And in 1992, an Alaskan appeals court overturned the conviction of former Exxon Valdez Capt. Joseph Hazelwood in connection with the massive oil spill in Prince William Sound.

Also in 1994, challenger Leonid Kuchma was elected president of Ukraine.

Also in 1995, the defense in the O.J. Simpson murder trial opened its case.

In 1997, the Senate approved George Tenet as director of the Central Intelligence Agency.

In 1999, the Democratic Republic of the Congo and five other African nations -- all of which had troops in Congo -- signed a cease-fire agreement in a bid to end that country's civil war.

Also in 1999, the U.S. team won the Women's World Cup in soccer, defeating China in the final on penalty kicks.

In 2000, Gov. George W. Bush became the first Republican presidential candidate in many years to address the N.A.A.C.P.

In 2002, the blue-chip Dow Jones industrials declined 282.59 points and the hard-hit Nasdaq index and Standard & Poor 500 stock index fell to their lowest levels since 1997. The Nasdaq, where technology companies are heavily represented, had lost almost 75 percent of its value since 2000.

In 2003, as the two countries opened high-level talks to discuss their reconciliation process. North Korea's chief delegate called on South Korea to forge a united front against the United States, which he said is "seeking to start a war of aggression against the Korean nation."

A thought for the day: French novelist Maurice Proust said, "Happiness is beneficial for the body but it is grief that develops the powers of the mind."

Odd News // 15 hours ago
Police rescue dog from Florida canal
Oct. 25 (UPI) -- Police in Florida came to the rescue of a dog that fell into a canal and found itself unable to climb out without assistance.

Odd News // 15 hours ago
Michael Jordan's rookie year shoes sell for record $1.47M
Oct. 25 (UPI) -- A pair of Nike shoes worn by Michael Jordan during his rookie season with the Chicago Bulls sold for a record-breaking $1.47 million at a Las Vegas auction. 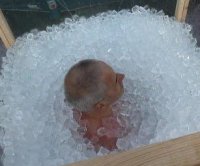 Odd News // 15 hours ago
Lithuanian man sits in ice for 3 hours to break world record
Oct. 25 (UPI) -- A Lithuanian man put his endurance to the test by spending 3 hours and 1 minute submerged up to his neck in ice to break a Guinness World Record.

Odd News // 17 hours ago
ER nurses get engaged in elaborate hospital roof proposal
Oct. 25 (UPI) -- A pair of ER nurses who fell in love at the Georgia hospital where they both work became engaged in an elaborate proposal on the roof of the building.