Feature: She acts, she sings

The band recently embarked on its first major tour as part of the lineup for the Warped Tour -- with scheduled dates in Houston; Dallas; San Antonio; Las Cruces, N.M.; Phoenix; Fullerton, Calif.; San Francisco; Las Vegas; San Diego; and Ventura, Calif. -- all inside of two weeks.

In an interview with United Press International, Lewis said she could stand the rigors.

"What people don't know is that my rugged film world has prepared me for this kind of tour," she said. "I'm not like a pampered whatever kind of actress. I've worked on movie sets where it's been 130 degrees, 18-hour days, in a prison in Chicago."

She also worked with rattlesnakes -- milked of their venom -- in "Natural Born Killers," with co-star Woody Harrelson.

"They were not defanged, and actually a cameraman wouldn't shoot them," she said, "but me and Woody worked with them. The wrangler said they would not bite when it's cold."

Lewis has had steady acting work since she broke into Hollywood in the 1987 TV movie "Home Fires." She played Audrey Griswold in 1989's "National Lampoon's Christmas Vacation" and the imperiled teenager with a crush on a killer in Martin Scorsese's 1991 remake of "Cape Fear."

She was attending a Blondie concert about a year ago, and suddenly it struck her: She needed to put her own band together.

Lewis started calling people and getting the word out, eventually recruiting a lineup of veteran musicians including Patty Schemel, the drummer from Hole. The lineup also includes Todd Morse, formerly of H20, on guitar and Paul Ill on bass.

"I picked a really, really great band, a really good group of musicians who all have a high work ethic and don't do drugs, have excellent taste and play excellent rock 'n' roll," said Lewis. "My band really represents my musical sensibility, and I've had to become a leader on this project and it's become a really incredible journey."

Given that this is her first band, and the musicians have all been through the music-business wars, does Lewis ever feel a bit self-conscious about giving direction?

"No, I'm way over that," she said. "We've been together a year now, but what has driven me on this whole thing is this fierce intention and this steel will that I have -- this single-minded drive in music."

Lewis performs her vocals with a ferocity and conviction that might be familiar to fans of her movie work.

"Even though there's not a live audience (on a movie set), I'm deeply connected to the audience," she said. "I want them to feel my emotion that I'm putting out."

Lewis said her goal is to lift people up and "release them" with the band's energy.

"Music, rock 'n' roll in particular, is something that does that -- gets straight to the point," she said. "It's a much different art than moving people with visual images."

Lewis has no intention of abandoning movies. Her schedule allows ample time to shift from the movie set to the recording studio and the road.

"I only work half a year on movies, so it's just a matter of scheduling things," she said. "I work on all kinds of different films, so my commitment is whatever I want to pursue at that time."

She is scheduled to do a movie immediately after the Warped Tour, co-starring in a comedy called "Grilled" with Ray Romano, Kevin James and Burt Reynolds.

The first Juliette & the Licks album is scheduled for a Sept. 14 release. It's a high-energy set of eight songs.

"This first album was all representative of our live show," she said. "I wanted to develop our live show and have it be kind of rebel-rousing music, so I wrote songs that sound good live.

"It's all about urgency. It's all about tension -- sexual, political and social," she said. "It's not pretty, and the way I'm singing on it is to grab the listener by the throat."

Lewis said the second album would be "more melodic and a little bit more complicated song-wise."

And no, she doesn't mind the constant questions comparing acting to singing in a band.

"I feel it's my job to make believers out of people," she said. "I think audiences, when they watch us perform, all their questions get answered.

"I'm actually using what I have -- what makes me who I am as an actor is what makes me rock out on stage. A sense of drama and moving an audience." 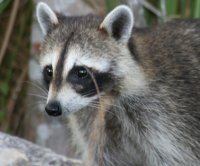 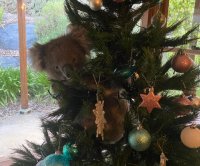 Odd News // 16 hours ago
Australian woman finds wild koala in her Christmas tree
Dec. 2 (UPI) -- Animal rescuers in Australia were summoned to he home of a woman who found something unexpected in the branches of her Christmas tree: a koala. 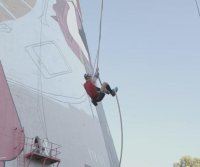