The moon is waning. The morning stars are Neptune, Uranus, Mercury and Venus. The evening stars are Pluto, Jupiter, Mars and Saturn.

In 1966, in Miranda vs. Arizona, the U.S. Supreme Court ruled that police must read all arrested persons their constitutional rights before questioning them.

In 1967, Thurgood Marshall became the first African-American on the U.S. Supreme Court. President Lyndon Johnson had chosen him to succeed the retiring Tom Clark.

In 1976, Arizona Republic investigative reporter Don Bolles died as a result of injuries suffered when a bomb blew up his car 11 days earlier. He had been working on an alleged Mafia story at the time of his death.

In 1977, James Earl Ray, convicted assassin of Martin Luther King Jr., was captured in a Tennessee wilderness area after escaping from prison.

In 1983, the robot spacecraft Pioneer-10 became the first man-made object to leave the solar system. It did so 11 years after it was launched.

In 1991, revising a policy with roots to the McCarthy era, the Bush administration agreed to remove almost all 250,000 names on a secret list of unacceptable aliens.

In 1993, 20 Somalis were killed and 50 more wounded when Pakistani members of the U.N. peacekeeping forces fired into a crowd of demonstrators protesting U.N. attacks on warlord Mohammed Farah Aidid.

Also in 1993, Canada got its first woman prime minister when the Progressive Conservative Party elected Kim Campbell to head the party, and thus the country.

In 1994, the ex-wife of O.J. Simpson and her friend, Ron Goldman, were found stabbed to death outside her condominium in the Brentwood section of Los Angeles.

In 1996, members of the Freemen militia surrendered, 10 days after the FBI cut off electricity to their Montana compound. The standoff lasted 81 days.

Also in 1997, the Chicago Bulls won their fifth National Basketball Association title in seven years when they downed the Utah Jazz, four games to two.

In 2002, Roman Catholic Church bishops and cardinals, meeting to discuss abuse charges against some priests, heard three men and a woman tell how their lives had been devastated by abuse and subsequent ill treatment by the church.

In 2003, Thai and U.S. officials have arrested a suspected illegal arms dealer in Bangkok with radioactive material that could be used to make a "dirty bomb."

Also in 2003, thousands of protesting Tehran students ran the streets lighting fires and swinging chains in a third day of demonstrations.

A thought for the day: Francis Bacon wrote, "It is as natural to die as to be born; and to a little infant, perhaps, the one is as painful as the other."

Odd News // 29 minutes ago
Restaurant offers year of free burgers to customers who get tattoos
April 14 (UPI) -- A California-based restaurant chain is offering customers free burgers for a year if they get hamburger tattoos bearing the eatery's name. 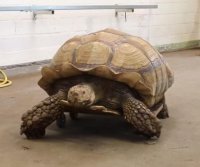