MIAMI, April 10 (UPI) -- The mayor of Miami-Dade County has sent an apology to Spain's Crown Prince Felipe after he and his fiancee were made to go through airport security.

The Miami Herald reported Saturday that Prince Felipe and Letizia Ortiz, the television newscaster he is due to marry in May, had arrived at Miami International Airport from the Bahamas Thursday with four Spanish security men to board an Iberia Airlines flight to Madrid.

Airport security staff insisted on searching the party's carry-on baggage despite their protests that this was a breach of protocol. "But we're your allies," one of them shouted in Spanish. The baggage was searched in private.

Miami-Dade County Mayor Alex Penelas sent the prince a letter apologizing for the "apparent disregard for protocol and disrespect of His Highness and his delegation." He said he had ordered an investigation into the incident.

But a spokesperson for the Transportation and Security Administration told the paper the standard State Department practice required 72 hours advance notice for diplomatic treatment, whereas the Spanish party had given six hours.

Odd News // 5 hours ago
Apartment residents use pulley system to retrieve pizza from driver
April 6 (UPI) -- A pair of Missouri residents shared video of their creative way to interact with their pizza delivery driver and retrieve their food without leaving their second-floor apartment.

Odd News // 5 hours ago
Deer taking over Calgary neighborhood during lockdown
April 6 (UPI) -- Residents of Calgary, Alberta, said the streets being emptied of travelers amid the coronavirus pandemic has led to an influx of unusual visitors -- a large herd of deer.

Odd News // 7 hours ago
Dog rescued from deep coastal chasm
April 6 (UPI) -- Rescuers on the Isle of Man are asking residents to remember to use leashes when walking their dogs after a canine fell into a deep chasm while out for a stroll.

Odd News // 7 hours ago
British firefighters clean up industrial foam spill
April 6 (UPI) -- Firefighters in Britain were summoned to an industrial property to deal with an unusual situation -- a spill of more than 30 gallons of fire retardant foam.

Odd News // 10 hours ago
Guinness approves Chicago woman's hula hoop world record
April 6 (UPI) -- A Chicago woman said she has been officially notified after months of uncertainty that she captured a Guinness World Record for hula hooping for 100 consecutive hours. 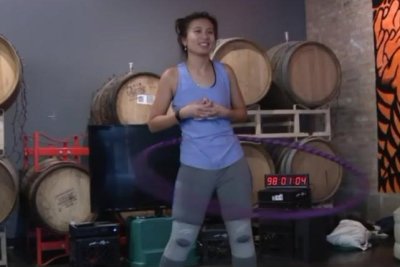