ALL WORK, NO PLAY, NO SEX

Long hours at work have resulted in 20 percent of workers in Britain saying they are too tired for sex.

The survey by the union Amicus finds the number of too-pooped-to-participate workers jumps to 28 percent in London.

The poll of 3,500 workers across the United Kingdom finds that in addition to not having time for sex, many workers feel they don't spend enough time with their partner, children -- much less do they exercise, reports the Liverpool Daily Post.

"Forcing people to work excessive hours is the work equivalent to a low carb diet -- immediate results but with potentially damaging effects on the health of your business," says Amicus general secretary Roger Lyons.

At 21, Brittany Spears seems to be wearing less and less. There was the scantily clad performance at the National Football League's kickoff concert.

There was the live performance outside MTV's studio in New York City where her half shirt and low-cut trousers showed off her purple underwear.

The former mousekateer says, however, her performance outfits simply reveal how comfortable she is with herself, reports ABC News.

However, she regrets a Esquire magazine photo shoot where she took everything off but her pearls, underwear and shoes. "Those are a little much," Spears tells Diane Sawyer on ABC's "Primetime."

It's far from the Australian outback, but about 50 kangaroos are living happily in the wild in a forest west of Paris, the New Zealand Herald reports.

The marsupials escaped a French animal park, the Emance nature reserve, 30 years ago and took up residence nearby in woods bordering several villages in Eure-et-Loir.

"Kangaroos have been part of our daily life for 20 years," Francoise Grangeon, mayor of Emance, tells Le Parisien.

However, tourists are a bit taken aback when they see road signs indicating that kangaroos live in the Rambouillet forest.

Actor-director-producer Erie Stoltz battled traffic for 45 minutes on a Los Angeles highway to grab a dog running in and out of traffic.

Stoltz, a vegetarian, tried to lure the mutt with a lemon-flavored Luna bar but the dog was not interested.

However, another motorist offered a can of cat food and the dog "went ape over it" and jumped into the actor's car, the New York Post reports.

Stoltz, who already owns a 12-year-old yellow Labrador, took the shepherd-Rottweiler-pitbull-Lab mix to a veterinarian to scan for an identifying microchip, but there was none.

The actor named the dog Chancer -- Irish for "someone who takes great risks, pushes his luck and survives," and he's looking for someone to adopt the dog.

Odd News // 7 hours ago
Alligator found hiding under vending machine at Florida gas station
June 17 (UPI) -- Three sheriff's deputies in Florida responded to a convenience store to help sort out an unusual problem -- an alligator hiding under a vending machine. 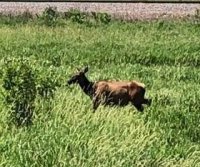 Odd News // 8 hours ago
Escaped elk runs loose next to Wisconsin highway before capture
June 17 (UPI) -- Authorities in Wisconsin said an elk that escaped from a farm went for a run along the highway before being safely recaptured.

Odd News // 8 hours ago
Lost class ring found on Wisconsin campus after 45 years
June 17 (UPI) -- A Wisconsin college employee using his metal detector on the campus found a high school class ring underground that turned out to have been lost 45 years earlier.

Odd News // 8 hours ago
Briefcase of old photos rescued from trash at New York park, returned to family
June 17 (UPI) -- A New York man who found a briefcase filled with old photos in a public park trash can was able to reunite the photos with family members of the owners.

Odd News // 9 hours ago
Woodpecker destroys nature camera at Russian nature reserve
June 17 (UPI) -- A nature reserve in Russia said a nature camera disguised as a piece of bark had an unintended consequence when it was destroyed by a hungry woodpecker.