Trumpeter Tommy Ladnier was born this day in 1900 in Florenceville, La. He was a fixture on the early Chicago jazz scene before joining Fletcher Henderson's band and touring Europe with Sam Wooding. Despite a drinking problem and the tough Depression times, Ladnier stayed with his music.

In the early 1930s, he opened a tailor shop in New York with saxophonist Sidney Bechet. They soon formed a band called the New Orleans Footwarmers and recorded some classic sessions for the Victor label in 1932. Ladnier died in 1939.

Saxophonist Andy Kirk was born this day in 1898 in Newport, Ky. He was a mailman and part-time musician for more than a decade before taking over leadership of the Clouds of Joy swing band in 1929. Kirk kept the Clouds together until 1948.

On the New York jazz scene... the Lou Donaldson quartet is the Village Vanguard through Sunday. The Cyrus Chestnut trio is at the Jazz Standard this week. Singer Michael Bublé makes his New York City debut this week at the Blue Note. Drummer Billy Cobham's New Spectrum Band is at Iridium through Sunday. Barbara Carroll is at Birdland tonight. The Miles Griffith quartet is at the Zinc Bar tonight. The Jim Campilongo trio is at the Knitting Factory's Tap Bar tonight. The LP All-Stars -- Li'l Johnny Rivero, Ralph Irizarry, Ray Martinez, Edwin Sanchez and Richie Viruet -- hold a jam session tonight at the Arka Lounge.

Singer Kenia is at Nighttown in Cleveland tonight.

In Chicago... the Buster Williams quartet is at the Jazz Showcase through Sunday. Henry Johnson's Organ Express with Chris Forman is at Andy's tonight. Bobby Lewis is at the Backroom. Mike Finnerty and the Jazz Hippies are at Cafe Ennui on Wednesdays.

The Bill Porter Orchestra with Rich Fudoli is at Green Dolphin Street. Kurt Elling's quartet is at the Green Mill tonight. The Brass Tracks Big Band is at Hackney's. Ken Saydak is at Joe's BeBop Café and Jazz Emporium. The Sketches in Blue trio is at the 100 South Chop House in Elmhurst tonight.

The Bobby Broom trio is at Pete Miller's Steakhouse in Evanston tonight. Jackie Allen and Judy Roberts are at Philander's in Oak Park. The Steve Evans trio is at Pops for Champagne tonight. Dave Flippo and Donn De Santo are at Pops of Highwood.

In New Orleans... the Ted Hefko quartet is at the Blue Nile tonight. Earl Brown is at Cafe Sbisa. Leigh "Little Queenie" Harris is at Dos Jefes. The Soul Rebels Brass Band is at El Matador. Lisa Lynn and the Stu Crawford quartet are at Fritzel's.

Another Monday is at the Funky Butt tonight. Mark Braud is at Harrah's. The Johnny Vidacovich trio is at the Maple Leaf. John Brunious leads tonight's band at Preservation Hall. The John Mahoney Big Band is at Snug Harbor tonight. Quintology is at d.b.a.

On the California jazz scene... the Martial Solal trio is at the Jazz Bakery in Los Angeles through Sunday. Eddie Palmieri is at the Catalina Bar and Grill in Hollywood through Sunday. The Gina Saputo quintet is at Steamers Jazz Café in Fullerton tonight. Chuck Berghofer and The Midnight Jazz Band are at Spazio in Sherman Oaks tonight. The Jack Sheldon California Cool quartet is at Charlie O's in Valley Glen tonight. Russell Gunn and Ethnomusicology are at Yoshi's in Oakland tonight.

Trumpeter Arturo Sandoval is at Dimitriou's Jazz Alley in Seattle through Sunday.

Guitarist Pat Martino has completed the studio work on his fourth Blue Note recording, "Think Tank," which is due out this fall. He made it with tenor saxophonist Joe Lovano, pianist Gonzalo Rubalcaba, bassist Christian McBride and drummer Lewis Nash. They played a variety of new Martino compositions and the John Coltrane piece, "Africa."

Saxophonist Gilad Altzmon, an Israeli expatriate living in England, is out with his newest CD, "Exile," on enja. Its U.S. release comes at the same time as the publication of his first book, "A Guide to the Perplexed." The recording by an expanded version of his Orient House Ensemble is a blend of jazz, Middle Eastern melodies and political musical statements. "Al Quds," an Arabic interpretation of an Israeli 1967 war anthem, has a hopeful, call-to-prayer feel.

In his twin projects, Altzmon raises questions with elusive answers. In his liner notes, he asks "How is it that people who have suffered so much and for so long can inflict pain on the other?"

His satirical book has been described as a darkly comic futuristic story that dares to imagine the journal of a mid-21st century archivist when the state of Israel has been dismantled and a new Jewish diaspora has begun.

Odd News // 19 hours ago
Men caught on camera hitching a ride on back of Baltimore bus
Jan. 17 (UPI) -- A traveler on a Maryland road captured video of two young men catching a free ride on the back of a Maryland Transit Administration bus.

Odd News // 19 hours ago
Crews rescue struggling dog from freezing Washington state river
Jan. 17 (UPI) -- Firefighters, police and animal rescuers responded to a freezing river in Washington state to save a dog that was unable to climb out of the water.

Odd News // 22 hours ago
Pigeon spotted in Nevada wearing tiny sombrero
Jan. 17 (UPI) -- Officials in a Nevada city said they are trying to find and rescue a pigeon seen wandering around with a sombrero apparently glued to its head.

Odd News // 22 hours ago
Overturned truck releases 1,738 piglets onto Iowa highway
Jan. 17 (UPI) -- Police and animal rescuers responded to a highway in Iowa to round up more than 1,700 piglets that escaped from an overturned truck. 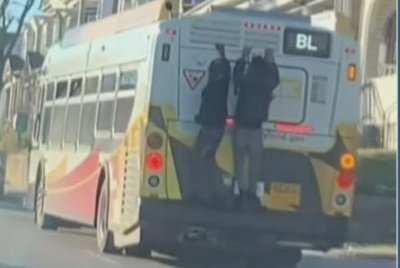