Eddy Arnold gets National Medal of the Arts from President Clinton in 2000.

Cowboy Copas records "I'm Waltzing with Tears in My Eyes," 1946.

GEORGE STRAIT HAS 50TH NO. 1 SINGLE

George Strait is smiling over his current No. 1 single, "She'll Leave You With A Smile."

It took over the top of the Billboard and Radio and Records country singles charts, which Strait says is the 50th time he's had a chart-topping song and a record for No. 1 songs by the same artist.

"There is no way that I can find the words to properly express my gratitude to everyone for their help," Strait said on his Web site, georgestrait.com. "I am very humbled by it all."

Strait's song knocked previous No. 1 "Who's Your Daddy?" by Toby Keith into the second spot on both charts. Rascal Flatts' "These Days" is No. 3 and "Somethin'" by Mark Wills is fourth.

Besides having a firm hold on the top spot on the all-genre chart, Shania Twain's "Up!" not surprisingly still is No. 1 on the Billboard Country Albums chart.

It's been atop both charts since it was released just over four weeks ago.

The Dixie Chicks' "Home" moved into the No. 2 position, nudging "Tim McGraw and the Dancehall Doctors" to third.

Tracy Byrd kicked off his annual homecoming weekend with the dedication of a special hospital unit in his hometown of Beaumont, Texas.

Byrd was at St. Elizabeth Hospital Thursday to present a check to the Tracy Byrd Hyperbaric Medicine and Wound Care Center, which is to open next month.

Odd News // 12 hours ago
California city hunting aggressive turkey that forced park closure
Aug. 13 (UPI) -- Officials in a California city said they are attempting to capture and relocate a wild turkey that was a longtime beloved resident before becoming so aggressive he forced the closure of a local park.

Odd News // 13 hours ago
Boar swims out of Baltic Sea, causes beach chaos
Aug. 13 (UPI) -- A peaceful day on a German beach turned to chaos when a wild boar swam out of the Baltic Sea and ran loose through crowds of sunbathers.

Odd News // 14 hours ago
Eagle sends drone to 'watery grave' in 'brazen attack' over Lake Michigan
Aug. 13 (UPI) -- Michigan state officials said a drone mapping shoreline erosion in the Upper Peninsula was sent to a "watery grave" in a "brazen attack" by a bald eagle.

Odd News // 15 hours ago
Anglers rescue drowning moose in Lake Superior
Aug. 13 (UPI) -- A pair of Ontario men out fishing in a boat ended up rescuing a moose struggling to keep its head above the waters of Lake Superior. 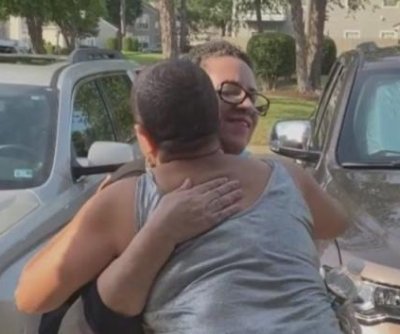