NEW YORK, Dec. 6 (UPI) -- Would somebody shut these Jesus People up?

First of all, we already know the answer to all these

questions. What would he do? NOTHING THAT WE WOULD DO!

This latest assault by IQ-challenged Christian greenies -- the "What Would Jesus Drive?" ad campaign run by the Evangelical Environmental Network -- is easily answered, in fact. He would WALK. He once walked 75 miles from Nazareth to Jerusalem just to attend the feast. He could have hitched a ride. They had donkeys and other people-bearing animals. HE DIDN'T.

He didn't lessen his physical burden in any way, much less do it with the equivalent of what the Roman Senate was riding around in. If he owned an SUV, or even the most fuel-efficient subcompact on the market, he would not only NOT ride in it, he would either give it away or sell it and give the money to the poor. He's on record as being in favor of that.

I only remember two times when Jesus wasn't walking. He had to get on that ship so he could walk on water, and he had to enter Jerusalem on an ass so that he could fulfill a prophecy. If you'll recall, he didn't use the ass because he was in a hurry. There wasn't anything to look forward to on that trip.

There's a simple reason that we don't know what Jesus wore, what he ate, how he slept, whether he was right-handed or left-handed, or what the color of his eyes were. The reason is that, if we did know any of these details about his life, there would be entire religions based around trying to mimic him. Never underestimate the ability of otherwise clear-thinking men to take the most meaningless outward sign of holiness and build a monument to it. Those snake-handlers in eastern Tennessee DO have scripture supposedly justifying everything they do.

In fact, Isaiah warned us about trying to stick our own worldly idolatry on the messiah. He said the messiah would be "without form nor comeliness, so that no one would desire him." In other words, if we look at the scriptural evidence, he was probably an ugly guy -- or at least nondescript -- and none of his habits would be worth copying. He wouldn't be interested in the crease of his fedora.

At any rate, since this "What would Jesus do?" thing is apparently not going away any time soon, let's make a list of what we KNOW he would do:

He wouldn't own anything.

He wouldn't care what he ate or drank.

He wouldn't give any thought to what he was going to do or say today, which pretty much rules out petition campaigns and worries about commuting. It's that whole "take no thought for the morrow" thing.

Even though he could turn stone into bread, he wouldn't do it.

Even though he could avoid being wounded or hurt -- the very angels themselves would bear him up if he threw himself off a cliff -- he wouldn't take advantage of that.

He was uninterested in controlling all the kingdoms of the world, which pretty much rules out running General Motors in an environmentally-friendly way.

He never handled money. (That was Judas's job.) The one time he needed it, he told some guy to go catch a fish and there would be a gold coin inside to pay his taxes with. Notice he wanted the money to come from the fish, not from him.

He never joined any cause. He was too busy "going about my father's business."

He never spoke against the most cruel government in the

World -- that would be Rome -- and in fact urged cooperation with it. "Render unto Caesar what is Caesar's," he said.

He didn't care much for family values. He said, in fact, that you need to first hate your family if you're to follow him.

The only use he had for the environment was that the plant kingdom was a perfect way to illustrate spiritual parables. Faith is like a kernel of wheat. Christians are like the fruit of the vine. If you asked him what the purpose of the environment was, he would probably say, "Simply to see something more important than the environment."

I should throw in one more for the pro-life people. He didn't speak against abortion at all. This was in a culture that not only had abortion, but the practice of abandoning babies to die of exposure if they were discovered to have physical flaws or diseases.

In other words, he wasn't a political sort of guy. He was the Son of God. If you really wanna ask what he would do, I hope you're prepared to go the whole nine yards. After all, the most important thing he did ... was die.

(Joe Bob Briggs writes a number of columns for UPI and may be contacted at joebob@upi.com or through his Web site at

Odd News // 5 hours ago
Dog rescued from deep pit after three days
March 30 (UPI) -- A family dog that went missing for three days in Vietnam was rescued from a deep pit by a man with a rope and bucket.

Odd News // 8 hours ago
Busch offering three months of free beer for dog adoptions
March 30 (UPI) -- The makers of Busch Beer are teaming with a Minnesota animal rescue to offer three months worth of free beer to anyone who adopts or fosters a dog from the group. 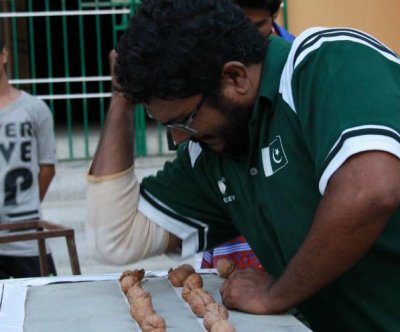 Odd News // 11 hours ago
Wandering turkey gives police the slip in Calgary
March 30 (UPI) -- A beloved neighborhood turkey in Calgary, Alberta, wandered far from its usual territory and was caught on camera giving police the slip.