Anthrax continued to bother Americans on this date in 2001 as a 94-year-old Connecticut woman became the nation's fifth anthrax victim. It was a death that mystified authorities since she rarely left home. But, a couple of weeks later, it was discovered a letter with anthrax residue had been delivered to a family living a mile away.

Nazi forces occupied western Czechoslovakia on this date in 1938 and declared its people German citizens. The annexation of the Sudatenland was Hitler's first major belligerent action. In response, England and its allies chose to sit still for it in return for a promise of "peace in our time," which Hitler later broke. This miscalculation has influenced geopolitics ever since, because it comes to mind when world leaders consider what, if anything, to do about regional troublemakers.

Thomas Edison announced one of his greatest inventions on this date in 1877. His new creation was the phonograph with the capacity to record and play back sound.

President Reagan and Soviet leader Mikhail Gorbachev ended a summit meeting in Switzerland on this date in 1985, and promised to step up the pace of arms-reduction talks.

It was on this date in 1800 that the U.S. Congress met for the first time in Washington, D.C. Members of the Senate and the House of Representatives had been meeting in Philadelphia from 1790 to 1800, when the north wing of the new Capitol was completed.

President Bush signed a new Civil Rights Act on this date in 1991. It made it easier for workers to sue in job discrimination cases.

The man they called the Junk Bond King was sentenced to jail on this date in 1990. Michael Milken, a former executive with the brokerage house Drexel Burnham Lambert, got 10 years for securities violations. Junk bonds are bonds that pay big because they carry high risk. In the 1980s and '90s, some people lost big by investing in them.

And it was on this date in 1783, in Paris, that Jean de Rozier and the Marquis d'Arlandes made the first free-flight ascent in a balloon.

Odd News // 19 minutes ago
Wedding ring lost for 30 years found under carpet at man's former home
Jan. 25 (UPI) -- An Alabama man was reunited with his long-lost wedding ring 30 years later when the new residents of his former home found it while pulling up an old carpet.

Odd News // 2 hours ago
Home of off-Broadway's 'Perfect Crime' temporarily closed due to crime
Jan. 25 (UPI) -- An off-Broadway play appropriately titled Perfect Crime had to cancel performances due to a real crime -- someone stole the copper pipes from the theater's basement.

Odd News // 22 hours ago
Horse runs through narrow gap between two Egyptian trains in viral video
Jan. 24 (UPI) -- A passenger on a train in India captured video of the moment a horse ran through the narrow gap between a moving train and a stationary train and survived the experience. 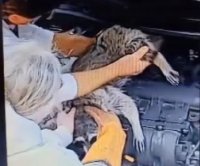