MORE CASH FOR OZZY AND FAMILY

Ozzy Osbourne and family now have a six-figure deal for a book on top of a reported $20 million deal for two more seasons of the surprise hit "The Osbournes" on MTV.

Simon & Schuster announced Thursday that it will publish two books about the Osbournes -- one a paperback in November tied to the MTV show, the other a hardcover memoir planned for spring 2003.

Tickets are on sale this weekend for the Rolling Stones World Tour 2002-2003 -- Boston and Chicago on Saturday, San Francisco on Sunday and New York City on Monday.

Mick Jagger said Sheryl Crow, No Doubt, Buddy Guy and Jonny Lang will open some of their shows. The itinerary features an unusual mix of arenas, stadiums, small theaters and clubs. Here is a list of tour dates, subject to change:

CROW, TRAIN WILL TOUR TOGETHER

Sheryl Crow and Train will tour together this summer on the Jeep World Outside Festival, an outdoor sports expo featuring a 30-foot-high ski jump, ice and rock climbing walls and a mountain-biking course.

The tour kicks off July 10 in Charlotte, N.C. Promoters have announced 23 shows through mid-August.

Crow -- who is promoting her new album "C'mon, C'mon" -- told LAUNCH she considers the release a summer album, even though the project came out of introspection.

"It turned out to be a real upbeat kind of high testosterone kind of record," she said.

HE SAYS IT ISN'T SO

R&B singer-producer R. Kelly has gone on a public relations offensive to deny allegations that he was caught on videotape having sex with a teenaged girl, but it is too early to tell whether the exercise in damage control is working.

"I've done a lot of wrong things in my life, but I am not a criminal," Kelly said Wednesday in an interview with "BET Tonight" anchor Ed Gordon.

"I am not a monster that people are saying I am," he said. "And if people out there have a tape of me and they're saying it's me and a young girl, a minor -- then they're sadly mistaken or they're lying. I can say with all confidence it's not me."

Kelly said he thinks a former manager might be responsible for getting the story around that he was caught on tape having sex with a young girl. After someone mailed a copy of the tape anonymously to the Chicago Sun-Times in February, the paper turned it over to the police department. Before long, the tape showed up on the Internet.

Kelly is married with two children. His biggest hit, "I Believe I Can Fly," won three Grammys in 1996.

His new CD with rapper Jay-Z, "The Best of Both Worlds," is selling poorly -- and a tour to promote it was canceled.

STALEY -- IT WAS AN OVERDOSE

The King County (Wash.) Medical Examiner has concluded that Alice in Chains frontman Layne Staley died from an accidental overdose of heroin and cocaine.

Staley was found dead at his home in Seattle on April 19. The coroner concluded that he had been dead since April 5 -- the sixth anniversary of the suicide of Nirvana frontman Kurt Cobain.

"The cause of death (for Staley) was acute intoxication due to the combined effects of opiate, heroin, and cocaine," said the coroner's office in a statement Tuesday. "The manner of death is accident."

According to Arista Records, Tionne "T-Boz" Watkins and Rozonda "Chilli" Thomas -- surviving members of TLC -- will finish work on the group's fourth album without Lisa "Left Eye" Lopes, who died in a car crash in Honduras last month.

VH1 reported that Arista hopes to release the album later this year.

The trio started work on the project late last year but took a break when T-Boz was hospitalized for two months for complications related to her sickle cell anemia. Longtime producer Dallas Austin told VH1 they were getting ready to go back to the studio when Lopes was killed on April 25.

"I've done about six or seven songs," said Austin. "(We also have) pieces of four or five more things that haven't been finished. Everybody was getting ready to start back working in the next week or two."

Lopes' publicist Jay Marose said he's heard some of the songs. He said TLC fans will be pleased when they hear the album.

Blink 182 is adding its name to the list of recording artists who have been made fun of on "The Simpsons."

"We already did the voices for it, but it takes about a year before it comes out," singer/bassist Mark Hoppus told LAUNCH.com. "So it should be out next February."

Blink 182 is currently on the Pop Disaster tour with Green Day and Jimmy Eat World.

So what's their story on the Simpsons?

"Let's see, said Hoppus, "Bart discovers that he was a former child actor when he was a baby and that Homer spent all the money he made. So he becomes legally emancipated and he kind of like hits the road."

Along the way, Bart runs into Blink 182 and skateboarder Tony Hawk.

Beach Boys fans will be able to pick up a new live version of the band's "Pet Sounds" when the CD arrives in stores on June 3, except in the United States where the item will not be available until June 11.

The album was recorded during Brian Wilson's sold-out four-night stand this year at London's Royal Festival, when Wilson and the band performed the influential 1966 album. The audience at the shows including Eric Clapton, Roger Daltry, Elvis Costello, Ray Davies, David Gilmour and the Chemical Brothers.

Daltry issued a statement expressing his admiration for the live set.

"After seeing Brian Wilson playing 'Pet Sounds' live," said The Who frontman, "I immediately went home and put on the Beach Boys' record. I've got to admit, the record wasn't as good." 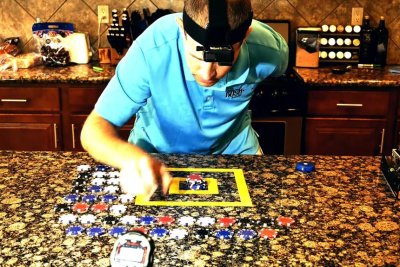