HOLLYWOOD, April 10 (UPI) -- Without argument, the Screen Actors Guild has the most beautiful union members of any labor group on the planet. Naturally, women SAG members could care less about their beauty when negotiating union business.

All the same, newsmen covering political machinations of activist actresses are somewhat swayed by their appealing appearance. At the moment they include SAG president Melissa Gilbert and board members Sally Kirkland, Frances Fisher, Valerie Harper, Olivia Hussey, Bonnie Bartlett and Diane Ladd to name a few.

Problem is these movie and TV female luminaries aren't all on the same side of a major issue currently dividing the 98,000-member guild. At the heart of their dispute is something called the Agency Franchise Proposal, an issue that has the guild up in arms -- especially board member Sally Kirkland.

A veteran of more than 100 movies and uncounted TV shows since 1960, Kirkland is most notorious for being the first actress ever to appear nude on stage Off-Broadway in "Sweet Eros" (1968).

She was nominated for an Academy Award in "Anna" (1987) and appeared in many hits, including "A Star Is Born," "Private Benjamin" and "The Way We Were."

Kirkland was near tears this week expressing her opposition to the SAG-ATA (Association of Talent Agents) proposal, which she claims would make actors employees of their own agents.

This is serious business because, she avers, the ATA agreement would reduce actors to little more than vassals of the men and women who get them jobs, negotiate contracts and take 10 percent of their earnings. "And even that could be increased to 20 percent if the guild accepts this proposal," Kirkland said in an interview this week. "Actors are being asked to accept a deal that will forever eliminate protections we have had (under guild aegis) for 63 years. It takes money and power away from us.

"Production companies and others could buy into agencies, which would be a conflict of interest."

Major stars, people such as Julia Roberts and Tom Cruise in the $20 million-per-picture bracket, could shrug. Twenty percent of $20 million might hardly be noticed. But to the average working actor it is a staggering percentage and well-worth fighting over.

The battle has been joined by some prominent names, including Richard Dreyfuss, who tells fellow guild members, "You shouldn't be forced to choose between your agent and the union that has protected you and guaranteed your benefits and working conditions for 75 years. The sky is not falling." His point of view is supported by Elliott Gould, Kent McCord, Scott Wilson, Fred Savage, Rene Taylor, Tom Bosley and Seymour Cassell, all members of the SAG board.

These dissidents have an Internet website -- www.actorsrights.org -- to rally fellow SAG members to fight against the proposed new deal with talent agents.

They want the union to vote "no" on the proposal that has won the support of guild president Gilbert.

The hue and shouting has come to the attention of a REAL politician, John Burton, California Senate president pro tem, who accused the guild of extensive distortions in its hard-sell tactics on the issue. What the SAG-ATA deal amounts to is neutralizing the union's power in favor of letting the California state labor board adjudicate beefs among the actors, agents and producers, a less sympathetic ear by far to actors' plaints than the SAG.

It suggests to an outsider that members of the guild would be shooting themselves in the feet to give their power to a state agency of any kind. Says Kirkland: "It's a complex situation, especially when it involves proposals such as eliminating actors residuals for commercials. I haven't done commercials since the '70s, but just the idea gets me so angry I'm ready to go to battle.

"I don't believe in strikes, but we've got to do what we have to do. We can't let go in the technological age and accept a flat fee. We have to have participation.

"I'm in a state of shock, perspiring at a board meeting that went on until one in the morning.

"I happen to like Melissa (Gilbert) as a person but I think a group has convinced her to be a poster girl for interests that could get very rich on SAG's acceptance of this proposal.

"At the meeting I wanted to shout, 'What's going on? Are you people trying to bust our union? Stop!'

"It feels to me that some people are trying to sell this union down the river. And I don't believe the guild will accept that when it comes time to vote."

Odd News // 2 hours ago
Soccer ball floats from Ireland to Wales, owner identified
April 16 (UPI) -- A Welsh family found a soccer ball washed up on the beach near their home and used Facebook to find the owner, who lost the ball in Ireland. 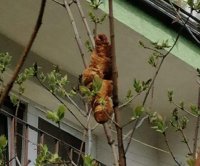