THESE PEOPLE HAVE TOO MUCH TIME ON THEIR HANDS

Forget Punxsutawney Phil. Depending on a groundhog to reveal whether spring has sprung is really a sappy approach to weather forecasting, according to researchers at Goshen College in northeastern Indiana.

Ryan Miller, a spokesman for the small liberal arts college, said the school's Scholars Advocating Precision -- also known as SAP -- held a brief ceremony Friday morning before tapping the sap of Goshen's Official Maple Tree, a 75-foot sugar maple. An 8-year-old boy was drafted to taste some of the sap to make sure that's what it was.

"When we tapped today, the sap started pouring out. That could be an indication of an early spring," Miller said. "The last two years, we got very little. Today, there was a steady drip. We think this takes some of the guesswork out."

Miller said the maple sap will be collected for two weeks. The amount collected will be plugged "into our top secret formula" and into a special "sapometer, a specially constructed device to measure the strength of winter against the strength of spring."

The "sapometer" was introduced in 2000. Miller said the device pointed to Feb. 29 that year as the official start of spring. The National Weather Service recorded record high temperatures of 67 at South Bend, Ind., that day and it hit 70 in Goshen.

Last year, the "sapometer" pointed to March 7 as the first day of spring. Temperatures, however, were only in the 40s but prognosticators claimed victory anyway since a large number of students and faculty turned out in shorts or short skirts to show their support.

This year, Miller said, security has been beefed up around the tree to make sure there's no tampering. "We're afraid as competition gets fierce between us and the groundhog, there will be interference from the rodent community," he said.

The security consists of a laser beam device. An alarm is set off if the beam is broken.

(Thanks to UPI's Marcella S. Kreiter in Chicago)

The Dutch heir to the throne, Crown Prince Willem-Alexander, married Argentinian Maxima Zorreguitea in a civil ceremony Saturday in Amsterdam.

The royal couple broke into laughter when Willem-Alexander at first was unable to slip a wedding ring onto Maxima's finger. But a final tug capped a union attended by at least four European monarchs and cheered on by thousands of well-wishers.

Before leaving the church, the newlyweds were each given a Bible -- one in Dutch for Maxima, and one in Spanish for Willem-Alexander. "Even though love is an international language, I am giving you a Spanish-Argentinean Bible," said the Rev. Carel ter Linden. "The only book that will never leave you speechless."

The newlyweds then rode through the city in a golden coach that once carried Queen Wilhelmina -- grandmother of the current monarch, Queen Beatrix -- to her wedding.

Morocco's 38-year old King Mohammed VI plans to marry a Moroccan commoner -- a computer programmer "in her 20s." The wedding will take place in Marrakech next March, where the royal couple will spend most of their time, rather than in the capital, Rabat. Mohammed is having his princely palace in Marrakech refurbished in order to accommodate his new queen.

Unlike his father, King Hassan, who kept his queen out of the public eye, Mohammed VI plans to "introduce" his queen to his people.

UPI has learned that the young future queen is currently spending time in Britain with Britain's royal family to get accustomed to royal life.

Queen Elizabeth II is sure to insist Mohammed's bride-to-be learns the importance of punctuality. King Hassan was notorious for almost always being unpunctual. On the queen's visit to Morocco in the 1970s, Hassan famously kept her waiting in the boiling sun for more than an hour. At Buckingham Palace, Hassan was known as "the late king" long before his death.

REASONS TO CELEBRATE THIS WEEK:

Angola celebrates Armed Struggle Day to commemorate the beginning of its quest for independence from Portugal in 1960.

And this is Independence Day in Sri Lanka.

TUESDAY: This is Dump Your "Significant Jerk" Day.

Today is Weatherman's, or the more politically correct Weatherperson's, Day -- observed on the anniversary of the birth, in 1744, of John Jeffries, a Boston physician and one of America's first weathermen.

WEDNESDAY: This is Pay-A-Compliment Day.

And New Zealand celebrates the national holiday of Waitangi Day, which commemorates the 1840 signing of the Treaty of Waitangi. The pact between the native Maori people and European settlers allowed the development of New Zealand.

THURSDAY: Today through Feb. 14 is Love May Make The World Go 'Round But Laughter Keeps Us From Getting Dizzy Week. (Web site: HumorProject.com)

This is Love Your Robot Day.

It's also National Girls and Women In Sports Day.

Today is Wave All Your Fingers At Your Neighbors Day. (Web site: wellcat.com)

This is Laugh and Grow Rich Day.

And it's Culture Day in Slovenia.

Sri Lanka, which celebrates the anniversary of its independence from Britain today, was once known by this name. What?

Ceylon. The country's name was changed to Sri Lanka in 1972. 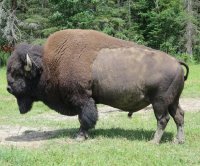 Odd News // 10 hours ago
Police respond to loose bison in Ohio township
July 29 (UPI) -- Police in Ohio responded to an unusual situation when an escaped bison was spotted wandering around a community.